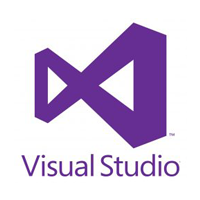 Visual Studio Professional 2015 Edition Visual Studio 2015 is an integrated development environment for creating impressive applications for Windows, Android, and iOS, as well as modern web applications and cloud services. The Visual Studio 2015 Preview included many new features that further improve the quality,  the way developers work with everything from the web and desktop to mobile apps.

Visual Studio 2015 is designed to boost the power and productivity of Microsoft’s integrated development environment used to develop computer programs for Windows as well as websites, web applications and web services. Microsoft also wants to make it more affordable and easier to use, regardless of what platform you are on or what app you are building.

When Visual Studio 2015 is released later this year, all active Visual Studio with MSDN subscribers will be upgraded to the new editions as noted in the following table:

Visual Studio Enterprise with MSDN- An enterprise grade solution with advanced capabilities for teams working on projects of any size or complexity, including advanced testing and DevOps

The newest version of Microsoft’s integrated, modern development toolset enables teams of any size to turn ideas into high-quality, scalable apps. Powerful web development tools for your environment, streamlined deployment to the cloud and the ability to create applications for iOS, Android and Windows from a single development solution, all make Visual Studio 2015 the mobile-first, cloud-first solution for every developer and development team.

In this major release by Microsoft some new features of Architecture, Design and Modelling have been improved. Using this functionalities all the design part is done. The main dependencies cycle and graph, relation among entities and other items in the project.

Architecture and modeling helps the developers to understand the dependencies over the modules while the coding of it can easily explain the use, design and graphical parts. If a project is proceeding then another programmer understands the code while going through the dependency graph and designs part of the code

The Code Maps for the preceding code

It can’t be longer to use Architecture Explorer to create these diagrams. But still Solution Explorer could be used for this purpose.

Here is the Newer Version of the Architecture tab in Visual Studio 2015 preview.

It can be seen that the appearance has changed and Object Browser and Class View were introduced and New Code Map was also introduced. Here we can see that Architecture Explorer is no longer supported but its functionalities can be invoked using Solution Explorer.

It can be seen that the appearance has changed and Object Browser and Class View were introduced and New Code Map was also introduced. Here we can see that Architecture Explorer is no longer supported but its functionalities can be invoked using Solution Explorer.

In the latest release, the diagrams can be updated using the Class View and Object Browser. it is mainly used to define the structure of the system. To meet software design requirements, use layer diagrams to describe the desired dependencies for the software.

Keeping the code consistent with this design by finding code that doesn’t meet these constraints and validating future code with this baseline. Note, this release omits various aspects although the complexity is still there but the efficiency of making the diagrams is increased.

Unified Modeling Language (UML) models help you to understand, discuss and design software systems. Visual Studio Ultimate provides templates for five of the most frequently used UML diagrams: activity, class, component, sequence and use case. In addition, you can create layer diagrams that help you define the structure of your system. 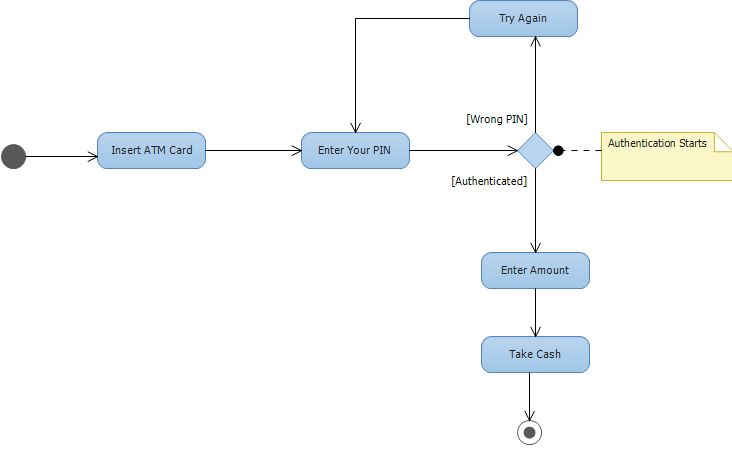 Figure: A rough sketch of UML activity describes an action that occurs when the user interacts with an ATM machine.

Unfortunately UML Class Diagrams are no longer created (and sequence diagrams as well) from code. But still these diagrams might be created using new UML elements.

Now try to generate the code from the diagrams. Note, we are doing the reverse of the process specified above.

Here we can see that the code has been generated and two files were generated, College.cs and Student.cs, since College and Students were classes as shown above.

Why should you choose Visual Studio?

The main reason why Visual Studio became so popular is that it has everything which any programmer expects from any code editor with some additional and useful features. It’s lightweight, fast, open-source and cross-platform nature along with other cool features gives it an extra edge over any other editor

We will install and Set up Microsoft Visual Studio by following the steps mentioned below:

Once you run the Installer, the Visual Studio Editor will be successfully downloaded into your local system, Later a dialogue box will be displayed on your desktop screen asking for a particular package you need in your system. Here, you need to select the .NET Desktop Development package. 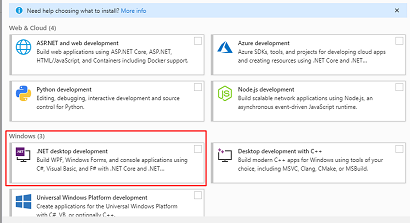 Once your packages for .NET Development are downloaded, then another dialogue box will be displayed on your screen asking for the development environment you are looking for. Here, you might select the environment for C# or any other language, depending upon your requirement. 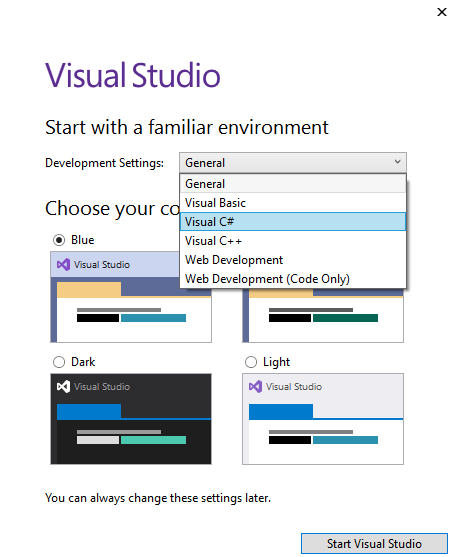 You need administrator credentials to install Visual Studio. However, you don’t need them to use Visual Studio after you install it.

Your local administrator account must have the following privileges enabled to install everything in Visual Studio.

Downloading from your subscription service
Visit the My.VisualStudio.com page, and select the edition of Visual Studio that you want.

1. If you are installing onto Windows you will not need ISO mounting software, otherwise you will need to mount this ISO file by following the below link

2. Ensure that the software version you are licensed for has downloaded completely before proceeding. Either open or mount the ISO file and double click on the .exe file to start the installation process. 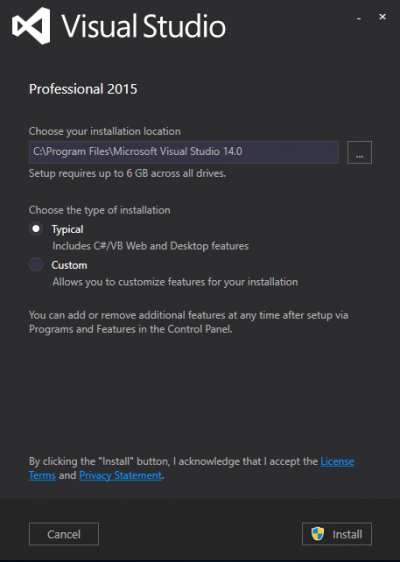 4. The UAC security window will come up, click yes to proceed. 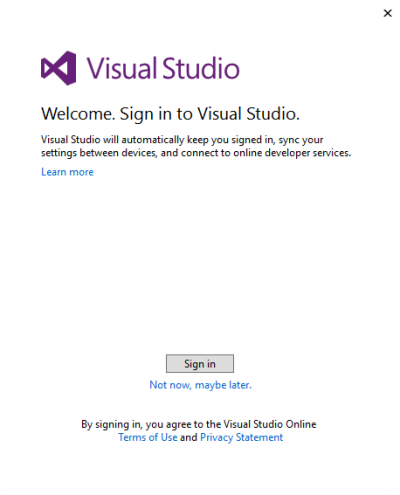 7. Select your development environment and theme. 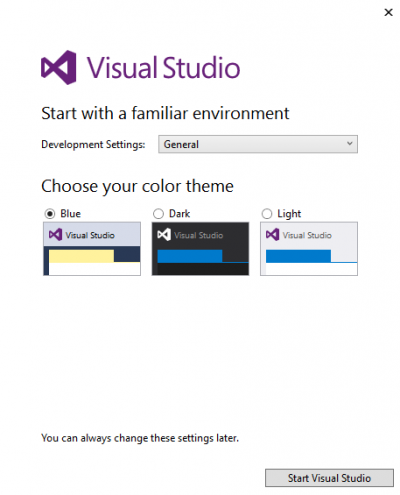 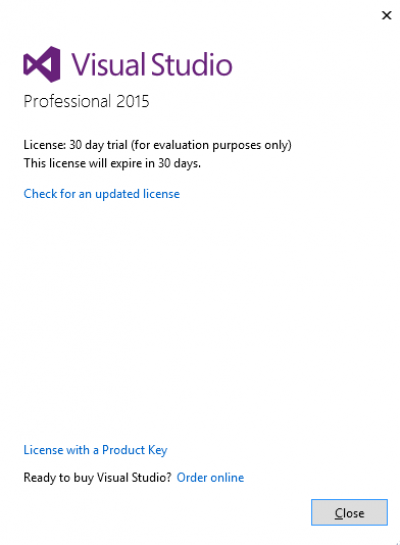 Fig 9 – License with a product key Features of Visual Studio
Visual Studio provides the most advanced features that the latest developers are looking for. Few of the most important features are described as follows.

Code Editor
The Visual Studio has the best in class Code editor which supports multiple functionalities. It enables bookmarks in code to incorporate Quick Navigation. In addition to the normal text, VS also provides Incremental Search, Regex Search, Multi-item Clipboard, and Task-list.

It is capable to attach itself to the currently running process to conduct monitoring and debugging procedures on the code, provided if the source code is available. VS can incorporate Memory Dumps and Multi-threading as well.

Designer
Visual Studio includes a number of visual designers to help within the development of applications.

This is a free edition having fully featured which can be used for students, open-source project contribution, individual developers and non-enterprise organization having not more than five users.
Visual Studio Professional
This is a commercial editions having Professional developer tools, services, and subscription benefits for small teams which can be used by purchasing the licensed copy.
Visual Studio Enterprise
This is a commercial editions having the features to meet end-to-end solution where high demand of quality and scale the team in all sizes. enterprise edition can be used by purchasing license.
Visual Studio Code

This is a Free, open source edition of visual studio which cab be used to develop the application using wide range of open source programming languages. Visual studio code can be installed on Mac, Windows and Linux operating system.
Let’s learn about top 10 features of visual studio 2017 which can be differ from edition to edition
Install what you wants
You can install the specific components whatever you wants which makes visual studio installation much  faster than previous edition
Contentious Integration and Deployment (DevOps)
You can configure CI-CD pipeline directly from the visual studio IDE itself
Integration with Cloud
You can integrate all visual studio developed application to Microsoft azure such as you can deploy your application on Microsoft azure directly from the visual studio and lot more
Lightweight Solution Load
You can load the projects in visual studio solution explorer very faster using lightweight solution load feature which is useful when your project solution contains multiple projects.
Live Unit Testing
You can test your code once you save your changes in visual studio editor instead of running test methods separately, This feature can help to fix the code issue while doing the real time development instead of fixing it later & change your code again.
Enforcing code styles and conventions
You can define your coding style and conventions directly from the visual studio and force developer to follow your defined coding standards which will help to achieve uniformity in coding standards across your project team developers.
Architectural Dependency Validation
You can validate your project architectural dependencies which will helpful to remove the unwanted  dependencies from your project & improve the performance as well as security.
Improvements to code navigation
You  can navigate easily into the code from visual studio to search classes and methods of  your project also visual studio 2017 makes very easier to find all references of particular variable or methods of your project.
IntelliSense filtering
You can filter the intellisense and find the appropriate properties and methods very easily.
The revised Start page
Click to Run Debugging
You can debug your specific line of code without setting the debug point with the help of click to run feature.

1)Flexibility: Its a Professional developer tool for building any application type.

2)Productivity:Visual  Studio has powerful features such as Code Lens to improve team’s productivity.

Note : Please use a Microsoft account to unlock the VS2015 IDE by signing in with your MS account. 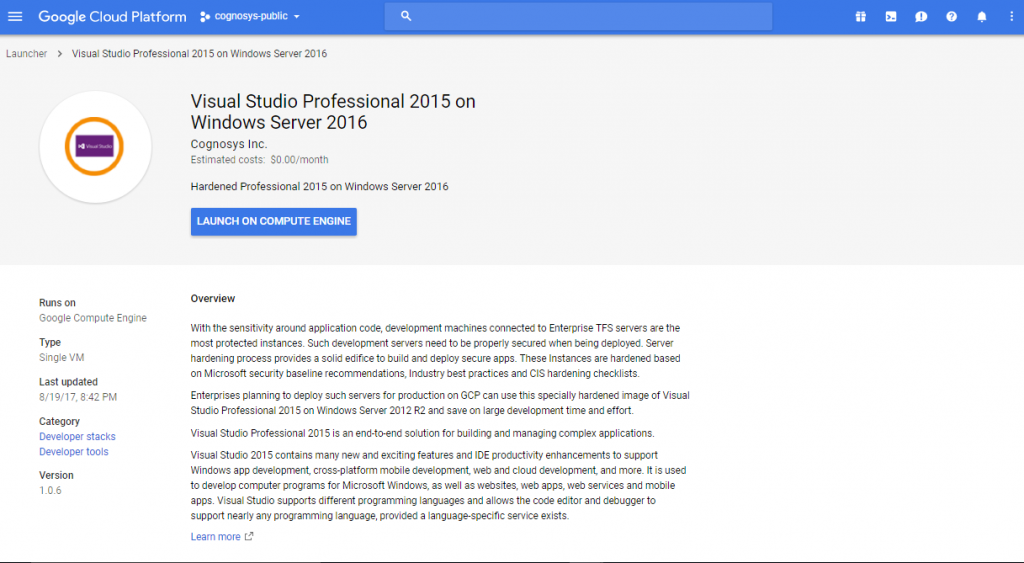 2. You can see at this page, an overview of Cognosys Image as well as estimated cost of running the instance. 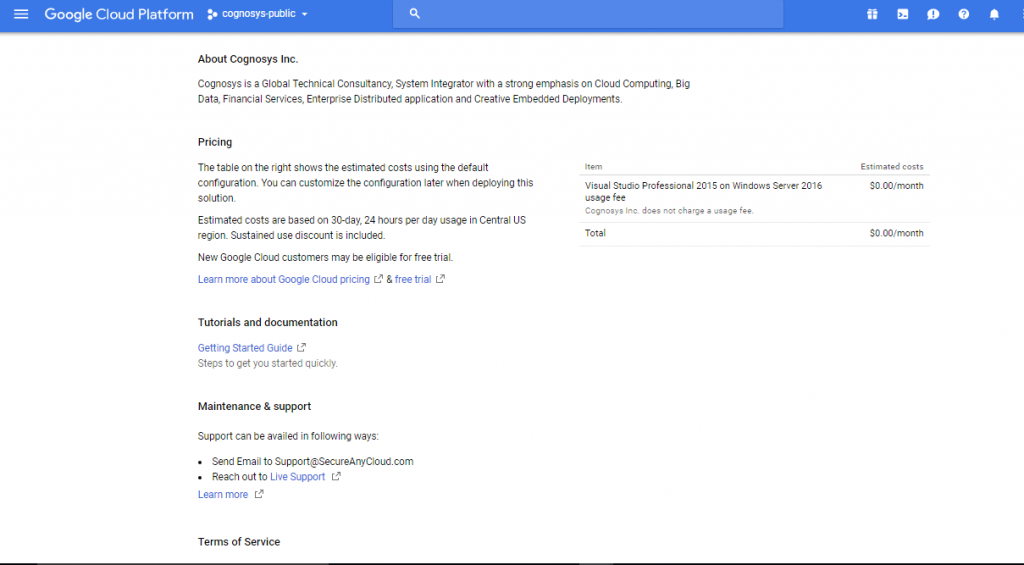 3. In the settings page, you can choose the number of CPUs and amount of RAM, the disk size and type etc 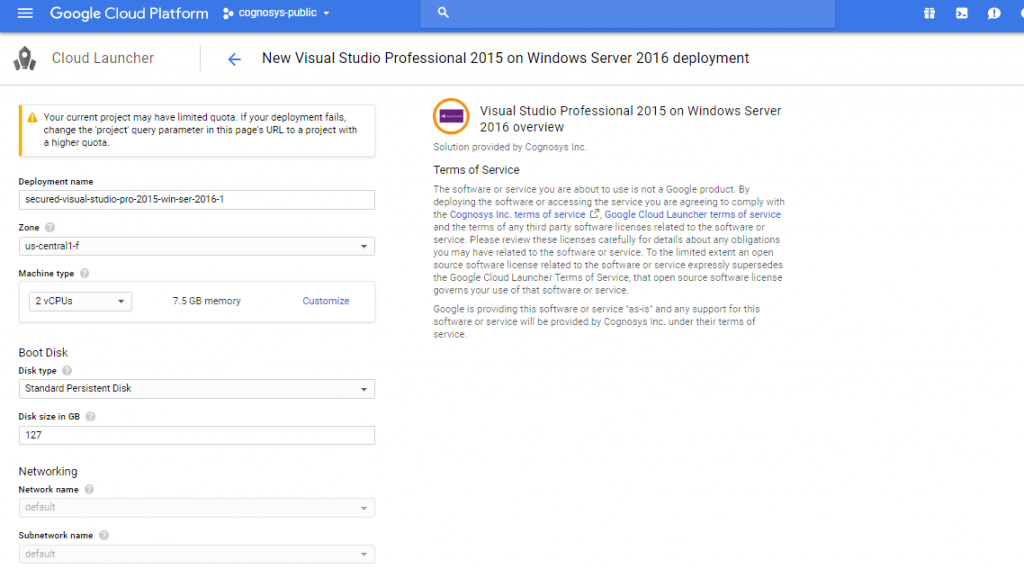