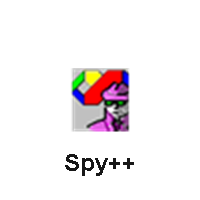 Spy tool to inspect UI Automation Elements on your desktop. It queries properties and control patterns information for the Automation objects that you select in navigation tree or pick from screen using the mouse pointer.

See buttons tooltips for hints on how to use them. You can copy values of properties using the context menu. You can also monitor UI Automation events raised by UI elements. Additionally, you can make actions on Automation elements using control patterns. This is a tool for UI Automation (UIA) developers.

Spy++ has a toolbar and hyperlinks to help you work faster. It also provides a Refresh command to update the active view, a Window Finder Tool to make spying easier, and a Font dialog box to customize view windows. Additionally, Spy++ lets you save and restore user preferences.

You can start Spy++ either from Visual Studio or at a command prompt.

When you start Spy++, if a message is displayed to ask permission to make changes to the computer, select Yes.

If you made any changes, follow the prompts to install these components.

On the Tools menu, select Spy++.

Because Spy++ runs independently, after you start it you can close Visual Studio.

Start Spy++ at a command prompt

Spy++ (SPYXX.EXE) is a Win32-based utility that gives you a graphical view of the system’s processes, threads, windows, and window messages. This section of the Spy++ Help includes the following help topics:

How does Spy++ highlighting work

in Spy++, if you are navigating the window tree hierarchy where it lists Windows parents and there children there is an option where you can right click on one of those elements and click “Highlight”. When you do that it will flash a border around the window showing you where it is on the UI.

to use Spy++, another Visual C++ utility. This useful, popular utility can display information about all current processes, their threads, and all open windows—even hidden windows.

After this lesson, you will be able to:

Start Spy++ the same way as you would the Dependency Walker, by selecting it from the Microsoft Visual Studio 6.0 Tools menu. The utility displays four main views:

These four views are activated by commands in the Spy menu, or by the first four buttons on the toolbar. Each time a command is invoked, it creates a view as a new child window, so the tool buttons do not toggle between existing views. Instead, you should create a view only once, and thereafter switch between views by making a selection in the Window menu. Like the Dependency Walker, Spy++ is an MDI program, so you can tile views within the client area.

The Windows view displays a list of all windows currently open. It does not matter if the window is hidden or not; many open windows in a typical Windows session are invisible, serving their various applications only as message receivers. When Spy++ begins or when the view is refreshed, the utility compiles a list of all windows and displays the list in the Windows view.

The list is a normal tree view with small plus and minus icons that collapse or expand the list into levels. The tree’s hierarchy indicates window parentage—that is, the relation between windows in which one window can create others as child windows. Click any plus icon adjacent to a window to expand the list to include that window’s children. If the plus icon does not appear next to a window, it means that the window does not have any children.

A typical list in the Windows view can include many windows, so it’s sometimes difficult to locate the entry for a particular window. In these cases, use the Window Finder tool.

  To use the Window Finder tool

Each process running in the Windows multitasking environment creates one or more threads; each thread can create any number of windows. Use the Processes view to examine a particular process, which usually corresponds to an executing program. Processes are identified by module names, or are designated system processes.

The Threads view lists all currently executing threads along with the names of their owner processes. Expand a thread entry to see a list of its associated windows.

For debugging purposes, the message log is perhaps the most useful of Spy++’s capabilities. It keeps a record in real-time of all messages that a window sends or receives. This allows you to examine a list of messages to see in what order they arrive, which is particularly useful for capturing window initialization messages.

A convenient way to begin message logging for a window is by using the Window Finder tool described earlier.

The Spy++ message log is divided into four columns:

By default, the list includes all messages, including mouse movement and keystroke messages such as WM_KEYDOWN and WM_KEYUP. This means the list can get crowded in a hurry, but Spy++ can filter the log to only those messages that interest you most.

In this practice exercise, you will launch the Spy++ utility and use it to spy on another application. By turning on the utility’s message logging feature, you can view in real time the messages belonging to a selected window.

In general, you will want to find the Handle of the other window programatically, because it will be different every time the app is launched, but Spy++ is great for debugging your app. And, the class name won’t change from one instance of an app to another, so you can use Spy++ to get the class name, then use it in your call to FindWindow() or FindWindowEx()

Spy > Log Messages
Use the target tool to select the window you want to trace
Click OK and all messages to do with that window start getting logged
Do the operation (like selecting a menu item pressign a toolbar button)
If your lucky and the ap opnes a new window then the trace will stop and pretty much the last entry will be the one you want (wID is the control ID you needyou need for the post message). If not you’ll just have to find it

Spy++, is a Visual C++ utility that reports information about executing programs. Spy++ can provide invaluable insight into an application’s behavior that is not available through the Visual C++ debugger.

Spy++ displays four main views that show a list of windows, processes, threads, and messages pertaining to a particular window. The Window Finder tool aids in associating any exposed window with the list of windows that Spy++ displays. The message tracking feature intercepts and logs all messages that enter and leave a window, showing chronological order and the values of message parameters. The message log can be filtered to monitor messages of particular interest only.

Spy++ (SPYXX.EXE) is a Win32-based utility that gives you a graphical view of the system’s processes, threads, windows, and window messages.Spy++ has a toolbar and hyperlinks to help you work faster. It also provides a Refresh command to update the active view, a Window Finder Tool to make spying easier, and a Font dialog box to customize view windows. Additionally, Spy++ saves and restores user preferences.