What is SQL Server?

SQL Server is a relational database management system (RDBMS) developed by Microsoft. It is primarily designed and developed to compete with MySQL and Oracle database.

SQL Server supports ANSI SQL, which is the standard SQL (Structured Query Language) language. However, SQL Server comes with its own implementation of the SQL language, T-SQL (Transact-SQL).

SQL Server Management Studio (SSMS) is the main interface tool for SQL Server, and it supports both 32-bit and 64-bit environments.

SQL Server is a relational database management system, or RDBMS, developed and marketed by Microsoft.

Similar to other RDBMS software, SQL Server is built on top of SQL, a standard programming language for interacting with the relational databases. SQL server is tied to Transact-SQL, or T-SQL, the Microsoft’s implementation of SQL that adds a set of proprietary programming constructs.

SQL Server works exclusively on Windows environment for more than 20 years. In 2016, Microsoft made it available on Linux. SQL Server 2017 became generally available in October 2016 that ran on both Windows and Linux.

The following diagram illustrates the architecture of the SQL Server:

The Relational Engine contains the components that determine the best way to execute a query. The relational engine is also known as the query processor.

The relational engine requests data from the storage engine based on the input query and processed the results.

The storage engine is in charge of storage and retrieval of data from the storage systems such as disks and SAN.

Under the relational engine and storage engine is the SQL Server Operating System or SQLOS.

SQLOS provides many operating system services such as memory and I/O management. Other services include exception handling and synchronization services.

Microsoft provides both data management and business intelligence (BI) tools and services together with SQL Server.

SQL Server has four primary editions that have different bundled services and tools. Two editions are available free of charge:

SQL Server Developer edition for use in database development and testing.

SQL Server Expression for small databases with the size up to 10 GB of disk storage capacity.

SQL Server Standard Edition has partial feature sets of the Enterprise Edition and limits on the Server regarding the numbers of processor core and memory that can be configured.

SQL Server 2014 includes an In-Memory OLTP engine code named Hekaton. This engine provides a lock and latch free environment for OLTP workloads. It is fully integrated into SQL Server and accessed using standard T-SQL. Contrary to other products in the market, Hekaton is not a separate system, it is part of the SQL Server Database Engine.  Hekaton enables you to use both disk based tables and Memory-Optimized Tables together in the same queries and stored procedures.

Memory-Optimized tables can be defined as durable, so data persists on server restart and with schema only duration to preserve table definition alone, useful for ETL transformations and data staging.

You can read more about Memory-Optimized tables and Natively Compiled Stored Procedures in my previous tips.

Since this version of SQL Server was designed with the premise of being a platform for a Hybrid Cloud it has some new and exciting features.

An on-premises SQL Server can have databases in which its data and log files are stored on Windows Azure Storage. This means that you can move your storage into the cloud while keeping all the transaction processing on your local server. Furthermore you can enable Transparent Data Encryption on databases while keeping the encryption key on the local server for added security.

This release also includes the possibility to Backup and Restore to/from a URL directly with SQL Server Management Studio.

As I told you before, this version of SQL Server was conceived as a platform for a Hybrid Cloud. So the Engineers at Microsoft had the wonderful idea of allowing Hybrid High Availability solutions like the creation of Azure replicas for Availability Groups with a simple Add Azure Replica Wizard to guide you through the process.

Also readable secondary replicas now remain available for reading on cluster quorum loss or when a primary replica is down.

Furthermore, the maximum number of replicas has been increased from 4 to 8.

SQL Server 2014 includes the possibility to use Cluster Shared Volumes as cluster shared disks in Windows Server 2012 and above on Failover Cluster Instances.

Several features have been added regarding performance.  Please see the following items below.

In order to reduce latency, transactions can be defined as delayed durable, which means that transaction returns control to the client before the Transaction Log record is written to disk.

This can be defined at the database level, COMMIT level, or ATOMIC block level in Natively Compiled Stored Procedures. Also the following Stored Procedure sys.sp_flush_log is included to flush the Transaction Log to disk in order to make previously committed transactions durable with delayed durability.

Here is a sample code.

SQL Server 2014 substantially improved the component of the engine that creates and optimizes query plans.  Stay tuned for more.

In SQL Server 2014 single partitions can be rebuilt and additional partition switching and index rebuild operations can be performed while the table is online.

Furthermore the ability to manage lock priority of online operations for tables and indexes has been added by allowing you to use WAIT_AT_LOW_PRIORITY option.  This option enables you to specify operation locks time maximum duration and abort conditions.  Here is some additional information:

Here is a sample code.

SQL Server 2014 permits statistics creation per partition by setting the INCREMENTAL option to ON in the CREATE STATISTICS statement. Here is an example.

This feature enables SQL Server to be configured to use a SSD disk as an extension for the Database Buffer Pool in order to reduce latency.

With the SQL Server 2014 release, we can set constraints on the physical IO operations.  The MAX_OUTSTANDING_IO_PER_VOLUME argument has been added to the ALTER RESOURCE GOVERNOR statement allowing us to set the maximum outstanding I/O operations per disk volume giving us the ability to tune the SQL Server instance IO according to the disk IO characteristics.

Also we can set the disk IO thresholds for disk volumes on Resource Pools with these two new settings: MAX_IOPS_PER_VOLUME and MIN_IOPS_PER_VOLUME.  These options set the maximum and minimum IO operations per second respectively.

Another feature is the capability to compress Columnstore indexes, both clustered and nonclustered even more. For this, two arguments have been added to the REBUILD option of the ALTER INDEX statement in order to handle Columnstore Indexes compression:

Also improvements in Batch processing mode have been made.  Stay tuned for more information.

Now SQL Server backup data can be encrypted during the backup creation with several new encryption algorithms like AES 128, AES 192, AES 256 and 3DES. I will cover this topic on a upcoming tip.

The following permission has been added in SQL Server 2014:

Default password for sa is set as Passw@rd123 for SQL Server.
Please change the password after first login.

SQL Server 2014 enables memory optimization of selected tables and stored procedures. The In-Memory OLTP engine is designed for high concurrency and uses a new optimistic concurrency control  mechanism to eliminate locking delays. Microsoft states that customers can expect performance to be up to 20 times better than with SQL Server 2012 when using this new feature. For more information, check out “Rev Up Application Performance with the In-Memory OLTP Engine.”

Microsoft has enhanced AlwaysOn integration by expanding the maximum number of secondary replicas from four to eight. Readable secondary replicas are now also available for read workloads, even when the primary replica is unavailable. In addition, SQL Server 2014 provides the new Add Azure Replica Wizard, which helps you create asynchronous secondary replicas in Windows Azure.

One welcome addition to SQL Server 2014 is the ability to encrypt database backups for at-rest data protection. SQL Server 2014 supports several encryption algorithms, including Advanced Encryption Standard (AES) 128, AES 192, AES 256, and Triple DES. You must use a certificate or an asymmetric key to perform encryption for SQL Server 2014 backups.

Note: You can reset ‘sa’ password by using windows authentication to connect to local SQL instance. Please use localhost in the server name when connecting from inside the RDC 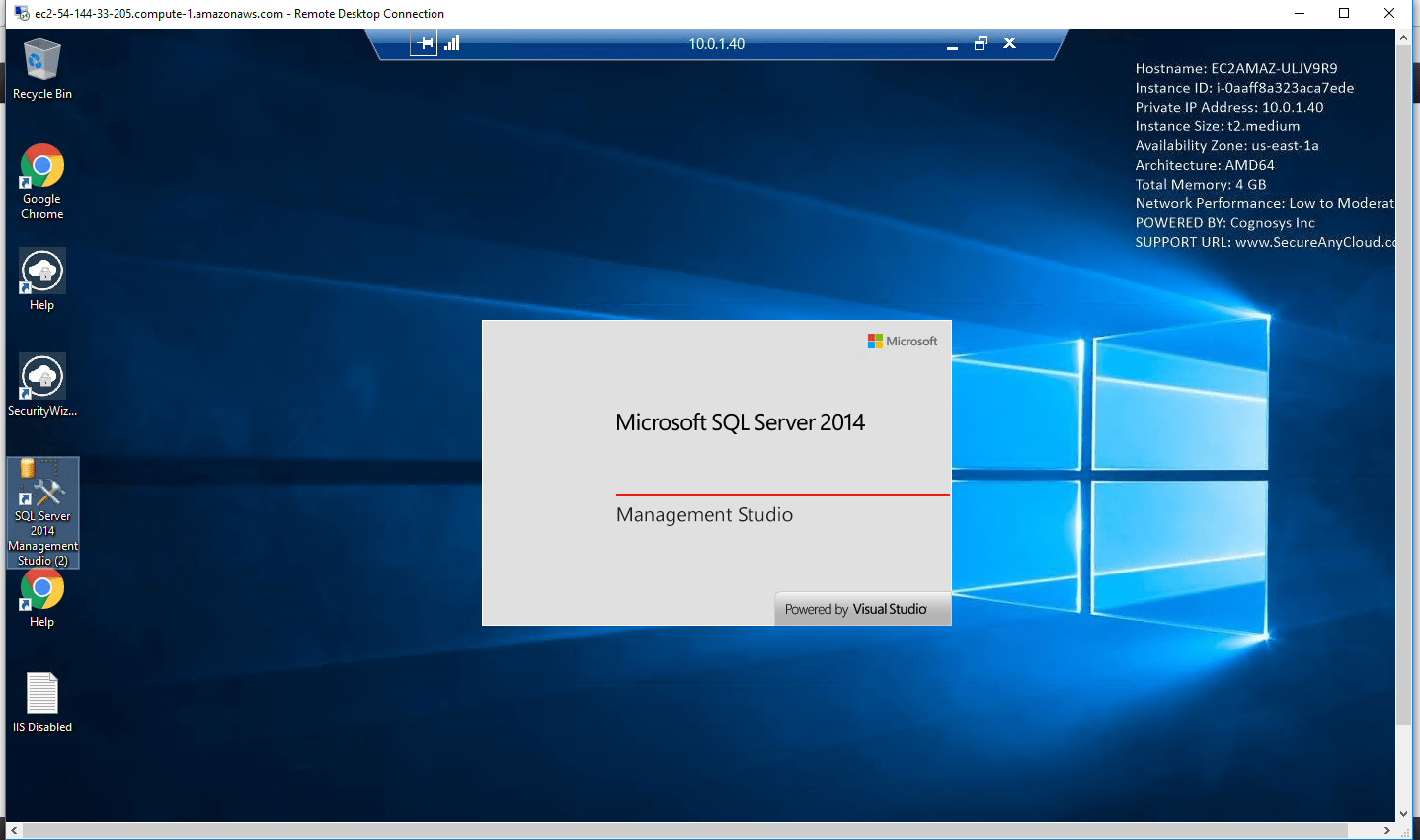 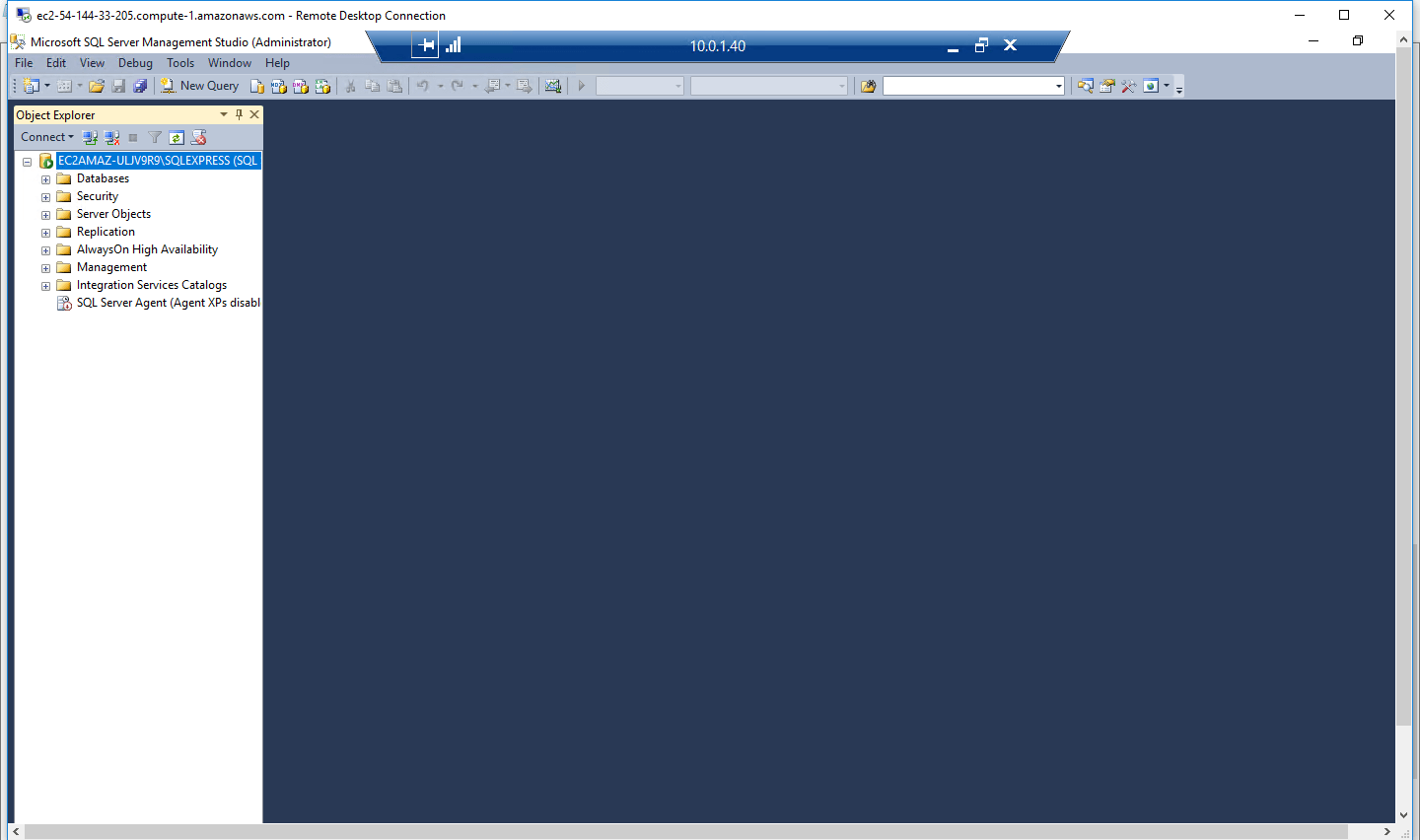 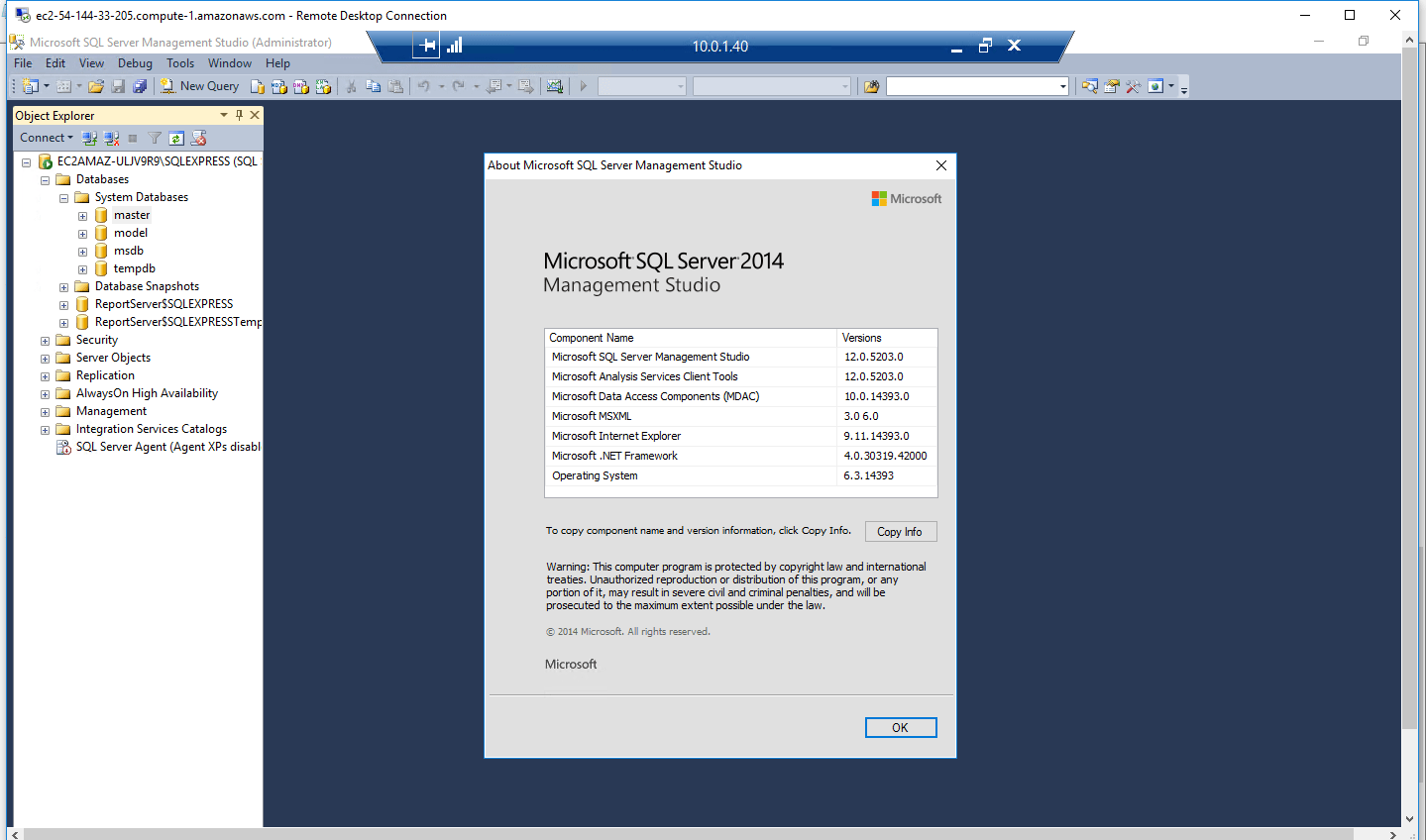 2.You can see at this page, overview of Cognosys Image as well as some estimated costs of VM. 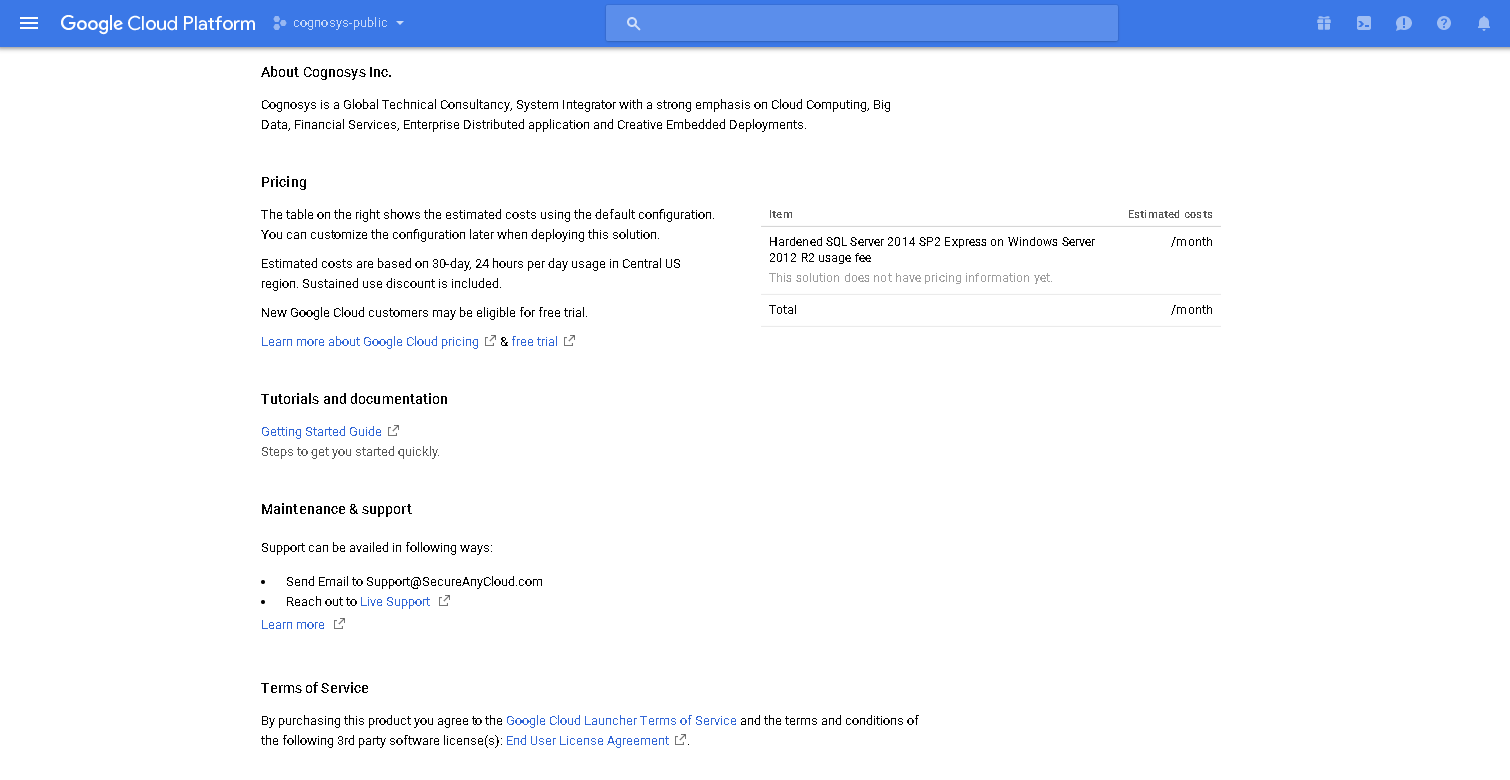 Step 2) RDP Connection: To connect to the deployed instance, Please follow Instructions to Connect to Windows instance on Google Cloud 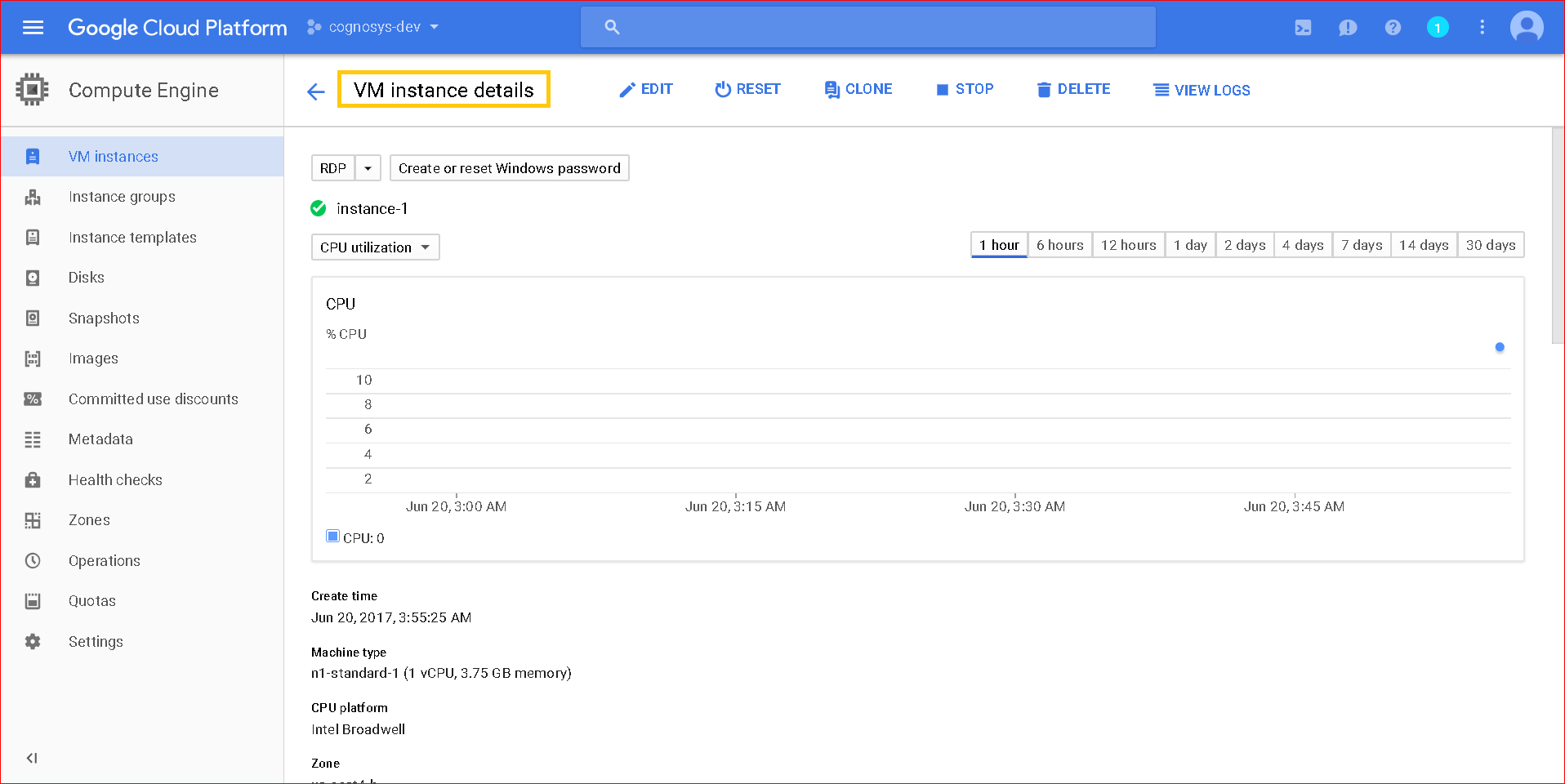 Step 3: Connect to SQL Management Studio Using the credentials as provided in Custom Metadata above.For getting password , Please follow below.