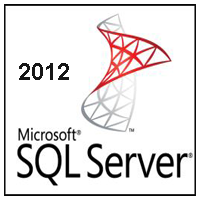 Microsoft’s SQL Server 2012 Standard Edition is a cloud-ready information platform that will help organizations unlock breakthrough insights across the organization and quickly build solutions to extend data across on-premises and public cloud, backed by mission critical confidence.It gives you basic data management and business intelligence capabilities for non-critical workloads with minimal IT resources. This is a server and 10-client access license.Easily manage permissions around data access to support separation of duties and enable compliance around strict data access policies.Simplify application testing and help minimize errors with production-like application testing and configuration changes and upgrades.

Some of the tools used and their details are as follows:

SQL Server Management Studio (SSMS) is the main administrative console for SQL Server installations. You can perform high-level administrative functions that affect one or more servers, schedule common maintenance tasks, or create and modify the structure of individual databases. You may also use SSMS to issue quick queries directly against any of your SQL Server Databases. Here are some examples of tasks you can perform with SSMS:

SQL Profiler provides a window into the inner workings of your database. You can monitor many different event types and observe database performance in real time. SQL Profiler also allows you to capture and replay system “traces” that log various activities. It’s a great tool for optimizing databases with performance issues or troubleshooting particular problems. As with many SQL Server functions, you can access SQL Profiler through SQL Server Management Studio.

SQL Server Agent allows you to automate many of the routine administrative tasks that consume database administrator time. You can use SQL Server agent to create jobs that run on a periodic basis, jobs that are triggered by alerts, and jobs that are initiated by stored procedures. These jobs may include steps that perform almost any administrative function, including backing up databases, executing operating system commands, running SSIS packages and more.

SQL Server Integration Services  provide an extremely flexible method for importing and exporting data between a Microsoft SQL Server installation and a large variety of other formats. It replaces the Data Transformation Services found in earlier versions of SQL Server.

SQL Server 2012 provides enhancements to the Resource Governor that enable you to more effectively govern performance, especially for machines with a large number of CPU cores. The enhancements include the following:

SQL Server 2012 adds four new spatial type classes: FULLGLOBE, CIRCULARSTRING, COMPOUNDCURVE, and CURVEPOLYGON. SQL Server 2012 also includes features and enhancements that improve performance for spatial data and operations, including new spatial indexes, a spatial index hint, compression, improved index build time, and a new query plan for spatial queries. In addition, SQL Server 2012 provides further performance enhancements at the spatial library level for Distance() and ShortestLineTo() methods along with performance improvements at the SQL level for methods which are based on them, including STDistance() and ShortestLineTo().

In SQL Server 2012, Microsoft has further extended the capabilities of SSIS into a much more comprehensive and robust data integration platform—with the emphasis on the word platform. The following are some of the highlights of SSIS 2012:

Full-text search in SQL Server 2012 now scales to more than 100 million documents. Significant improvement can also be realized in the traditional full-text query performance, which is reported to be approximately 7 to 10 times faster than in the previous versions of SQL Server. Additional performance improvements are a result of improved internal implementation, improved query plans, and preventing queries from blocking index updates.

The new functionality associated with full-text search includes the following:

SQL Server 2012 provides enhancements to almost every component of SSAS, along with the addition of major scale-out and in-memory capabilities. The following are some of the top new features and enhancements in SSAS:

Several new usability and flexibility improvements and enhancements have been added in the SQL Server 2012 version of Master Data Services (MDS). Following are some of the top new features and enhancements of MDS:

1. Launch the SQL Server Installer on your server and select Installation on the left

3.  Verify the Setup Support Rules all Passed then click OK

4. Enter your Product Key provided by Microsoft or the licensing partner and click Next.  We do not recommend using the Evaluation as it will expire after 180 days and your database will be inaccessible.

5. The Setup Support Rules list will appear again.  Please verify that all rules Passed then click Next

6. Choose SQL Server Feature Installation on the Setup Role step then click Next

7. check the following boxes during the Feature Selection step then click Next

Note: The Shared feature directory should usually be left on the Windows volume (e.g., C:\Program Files\Microsoft SQL Server\).  You will have the option to locate the database files on another volume in the Instance Configuration step (below).

9. Select the ACCTIVATE Named Instance and review/adjust the Instance root directory for the desired location of your data files on the Instance Configuration step then click Next

10. Verify the Disk Space Requirements (~1GB for SQL Server 2012 Standard) and click Next

11. Review the Server Configuration and adjust the SQL Server Browser to Automatic startup (Disabled by default).

13. Review the Error Reporting options.  You can just leave the defaults and click Next

14. Verify that the Installation Configuration Rules all passed then click Next

15. Carefully review the Ready to Install summary then click Install to begin the installation process

16. The Installation Progress step may take 15-20 minutes.  Please be patient and take note of any pop-up warnings or errors.

17. The Complete page should be displayed with the “Succeeded” status for each component.  You may be prompted to restart Windows after installing SQL Server 2012.  Please be sure to restart Windows before attempting to install Acctivate.

Click on the respective cloud provider tab for technical information.

Default password for sa is set as Passw@rd123 for SQL Server.
Please change the password after first login.

Easily integrate data from multiple disparate sources with enhancements to Integration Services which include rich DBA and IT Implementer support for the deployment and administration of ETL tasks, including better tracking of SSIS packet status, run SSIS as a server and the ability to run administration and other capabilities as a separate SQL Server instance.

SQL Server 2012 provides an enhancement to FILESTREAM storage by allowing more than one filegroup to be used to store FILESTREAM data. This can improve I/O performance and scalability for FILESTREAM data by providing the ability to store the data on multiple drives. FILESTREAM storage, which was introduced in SQL Server 2008, integrates the SQL Server Database Engine with the NTFS file system, providing a means for storing unstructured data (such as documents, images, and videos) with the database storing a pointer to the data. Although the actual data resides outside the database in the NTFS file system, you can still use T-SQL statements to insert, update, query, and back up FILESTREAM data, while maintaining transactional consistency between the unstructured data and corresponding structured data with same level of security. For more information on using FILESTREAM storage, see Chapter 20, “Creating and Managing Tables.”

SQL Server 2012 also introduces a new data warehouse query acceleration feature based on a new type of index called an xVelocity memory optimized columnstore. This new index, combined with enhanced query processing features, improves data warehouse query performance by hundreds to thousands of times in some cases and can routinely give a tenfold speedup for a broad range of decision support queries. Columnstore indexes can limit or eliminate the need to rely on prebuilt aggregates, including user-defined summary tables and indexed (materialized) views. Unlike typical row storage, which stores multiple rows of data per page, a columnstore index stores the values for a single column in its own set of disk pages. The advantage of columnar storage is the ability to read the values of a specific column of a table without having to read the values of all the other columns. For more information on the structure of columnstore indexes, see Chapter 30, “Data Structures, Indexes, and Performance.” For more information on creating and using columnstore indexes, see Chapter 57, “Parallel Data Warehouse Appliance.”

SQL Server 2012 introduces Database Audit. Similar to SQL Server Audit, Database Audit is based on the new Extended Events feature and enables you to audit database-level events or groups of events. For more information on Database Audit, see Chapter 16, “Security and Compliance.”

SQL Server Semantic Search builds its indexes using the indexes created by full-text search. With Semantic Search, you can go beyond just searching for specific words or strings in a document. Solutions are possible that include automatic tag extraction, related content discovery, and hierarchical navigation across similar content. For example, you can query the index of key phrases to build the taxonomy for an organization, or you can query the document similarity index to identify resumés that match a particular job description.

Within Master Data Services (MDS), SQL Server 2012 adds Data Quality Services. Data Quality Services complements MDS and is usable by other key data manipulation components within the SQL Server environment. This feature enables you to build a knowledge base of data rules and use those to perform a variety of critical data quality tasks, including correction, enrichment, standardization, and de-duplication of your data. This also includes the ability to do some basic data profiling to better understand the integrity and overall data quality state of your core data.

Note: You can reset ‘sa’ password by using windows authentication to connect to local SQL instance. Please use localhost in the server name when connecting from inside the RDC 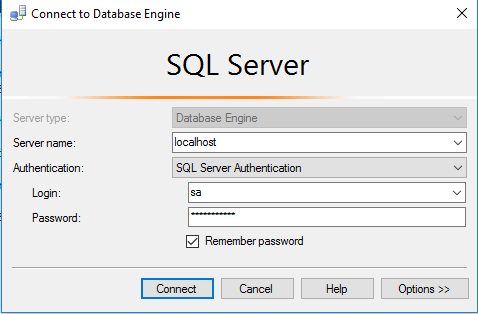 Note: Please change the password after the first login. 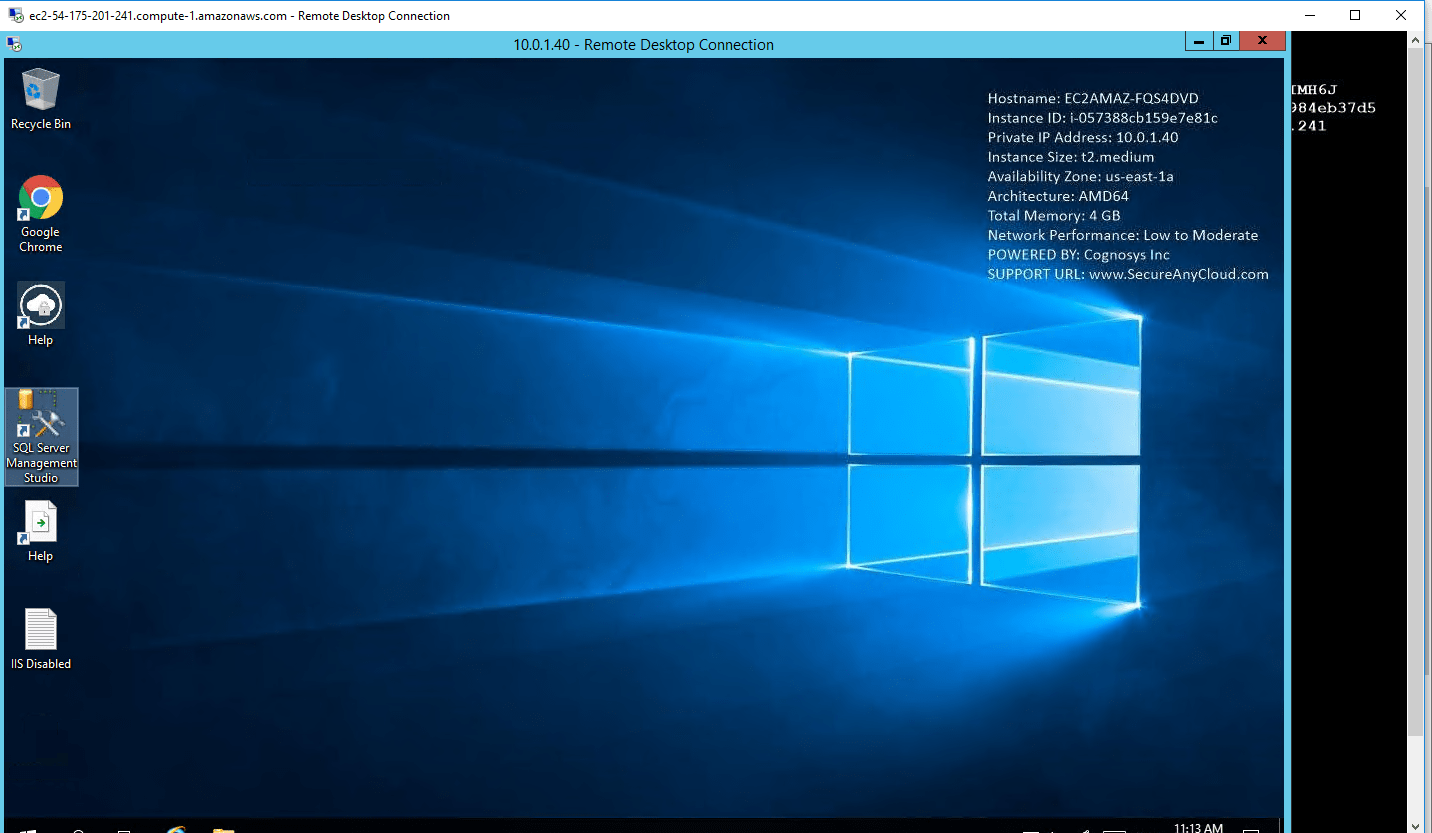 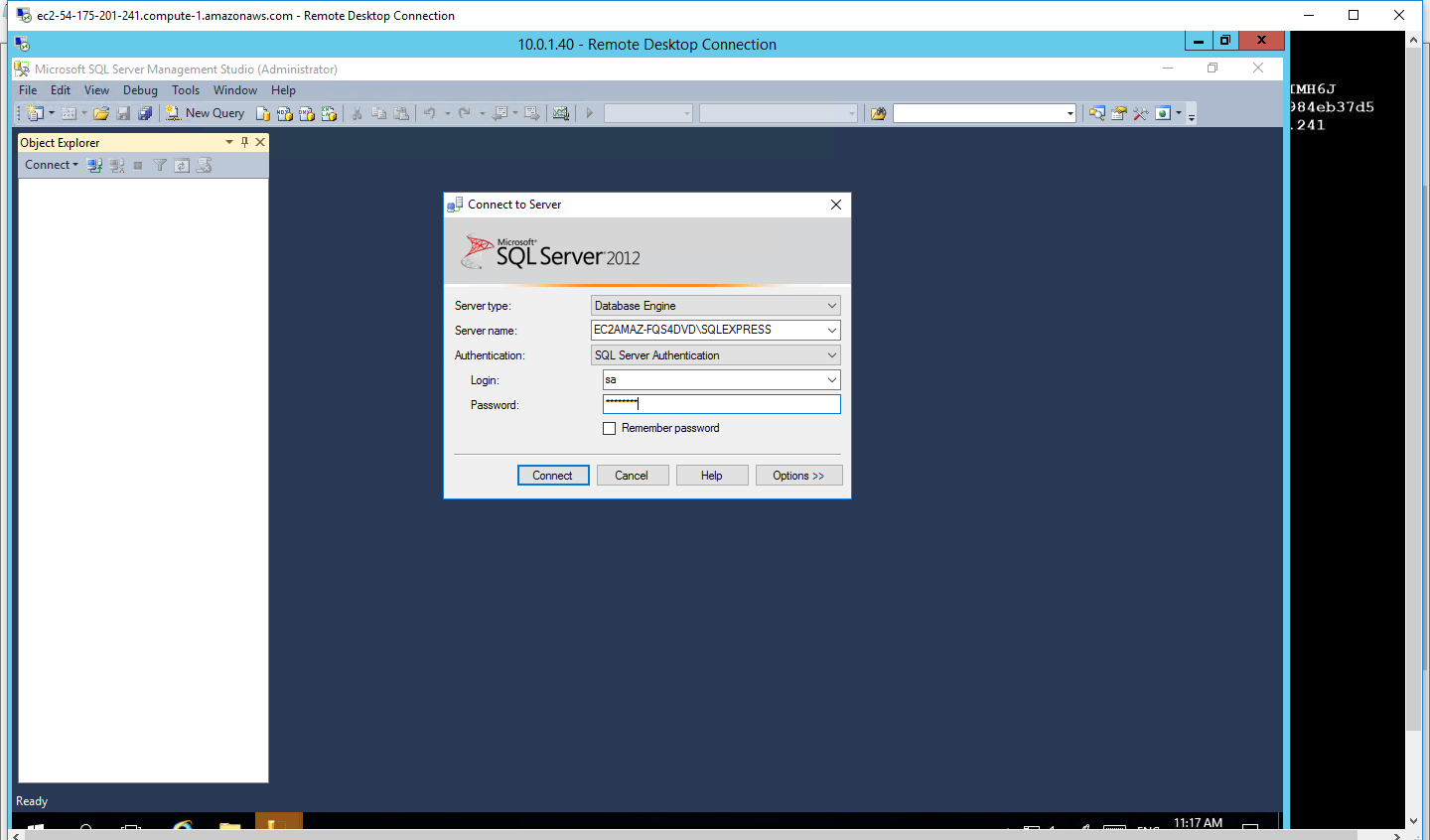 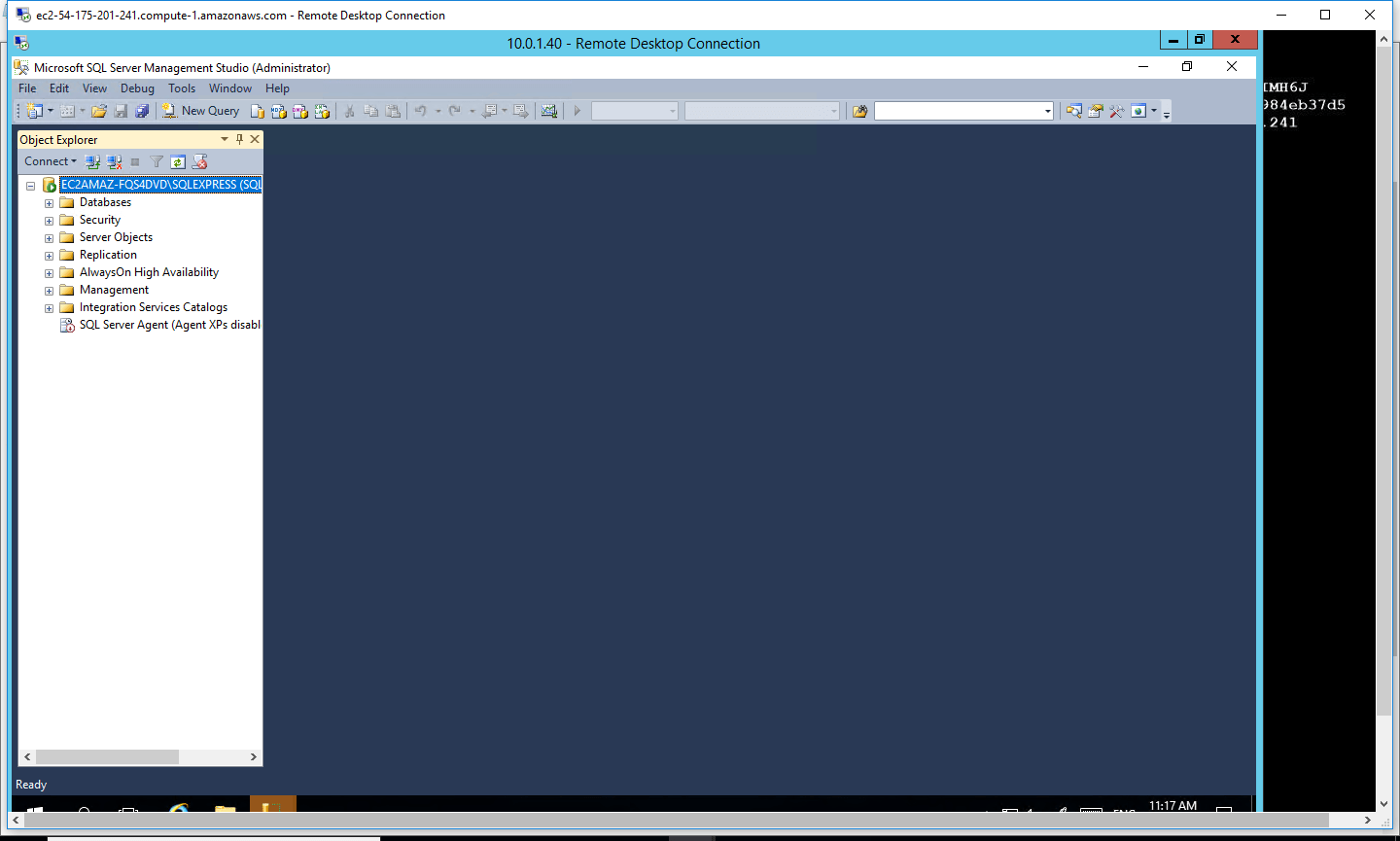 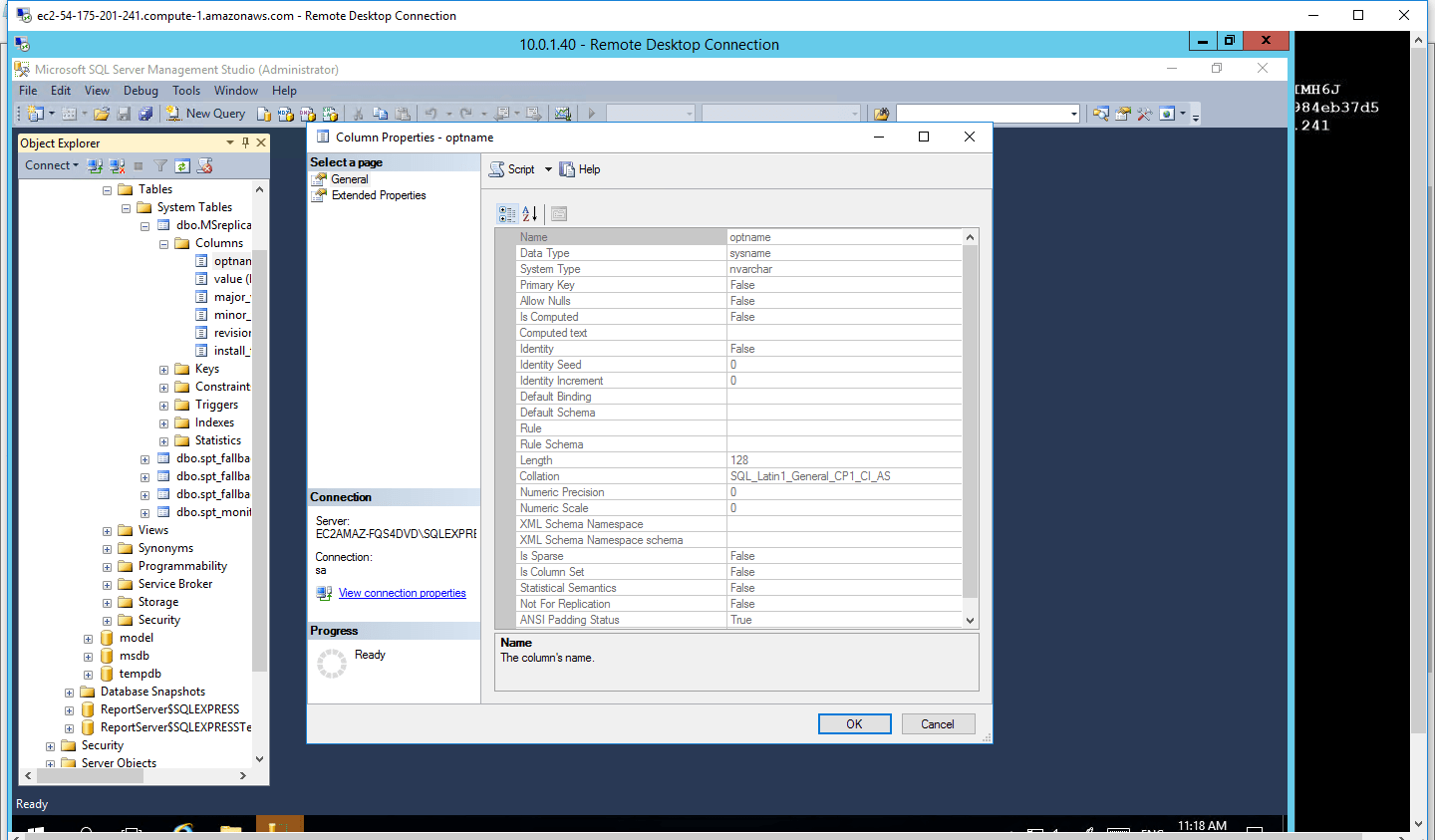 2.You can see at this page, an overview of Cognosys Image as well as estimated cost of running the instance.

Step 2) RDP Connection: To connect to the deployed instance, Please follow Instructions to Connect to Windows instance on Google Cloud