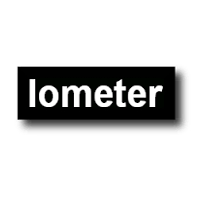 Iometer is an I/O subsystem measurement and characterization tool for single and clustered systems. It is used as a benchmark and troubleshooting tool and is easily configured to replicate the behaviour of many popular applications. One commonly quoted measurement provided by the tool is IOPS.

Iometer can be used for measurement and characterization of:

Iometer is an I/O subsystem measurement and characterization tool for single and clustered systems. It was originally developed by the Intel Corporation and announced at the Intel Developers Forum (IDF) on February 17, 1998 – since then it got wide spread within the industry.

Meanwhile Intel has discontinued to work on Iometer and it was given to the Open Source Development Lab (OSDL). In November 2001, a project was registered at SourceForge.net and an initial drop was provided. Since the relaunch in February 2003, the project is driven by an international group of individuals who are continuously improving, porting and extend the product.

Iometer is based on a client–server model, where one instance of the Iometer graphical user interface is managing one or more ‘managers’ (each one representing a separate Dynamo.exe process) which are doing the I/O with one or more worker threads. Iometer performs Asynchronous I/O – accessing files or block devices (later one allowing to bypass the file system buffers).

Iometer allows the configuration of disk parameters such as the ‘Maximum Disk Size’, ‘Starting Disk Sector’ and ‘# of Outstanding I/Os’. This allows a user to configure a test file upon which the ‘Access Specifications’ configure the I/O types to the file. Configurable items within the Access Specifications are:

In conjunction with the Access Specifications, Iometer allows the specifications to be cycled with incrementing outstanding I/O’s, either exponentially or linearly. The tool outputs 50 parameters into a .CSV file, allowing multiple applications to analyse and generate graphs and reports on the measured performance.

IOPS can be measured with applications, such as Iometer (originally developed by Intel), as well as IOzone and FIO and is primarily used with servers to find the best storage configuration.

The specific number of IOPS possible in any system configuration will vary greatly, depending upon the variables the tester enters into the program, including the balance of read and write operations, the mix of sequential and random access patterns, the number of worker threads and queue depth, as well as the data block sizes.There are other factors which can also affect the IOPS results including the system setup, storage drivers, OS background operations, etc. Also, when testing SSDs in particular, there are preconditioning considerations that must be taken into account 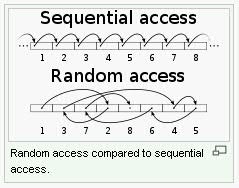 The most common performance characteristics are as follows 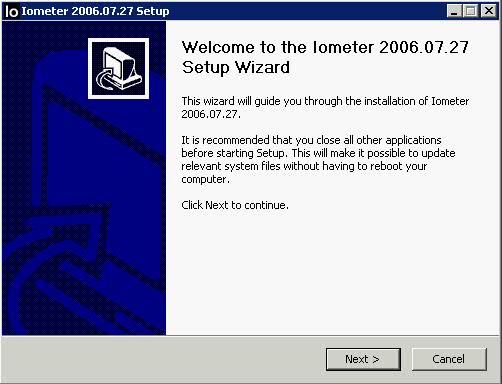 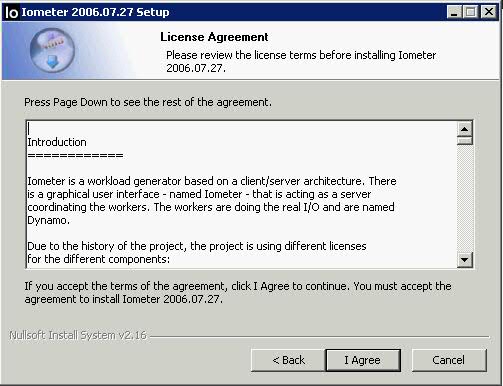 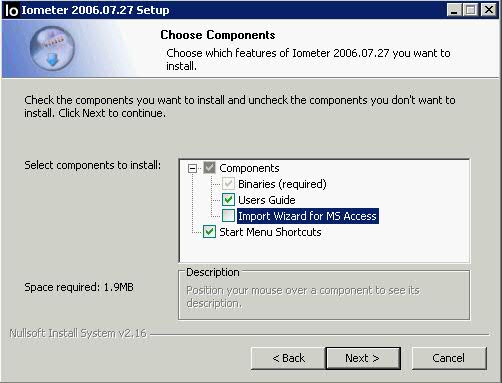 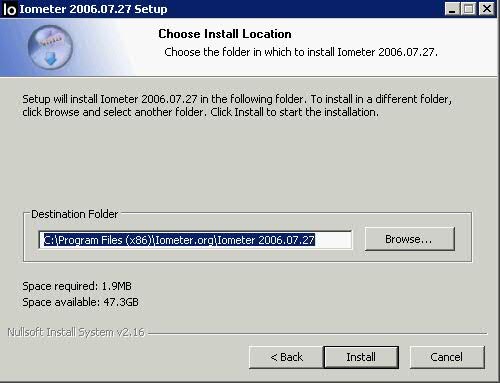 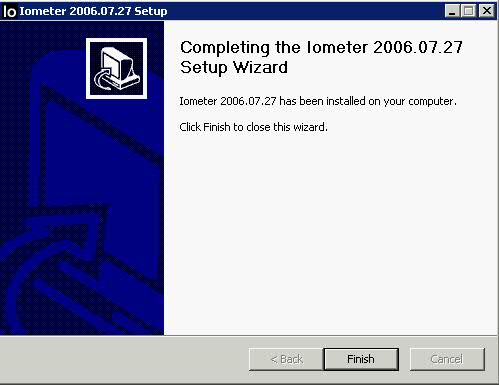 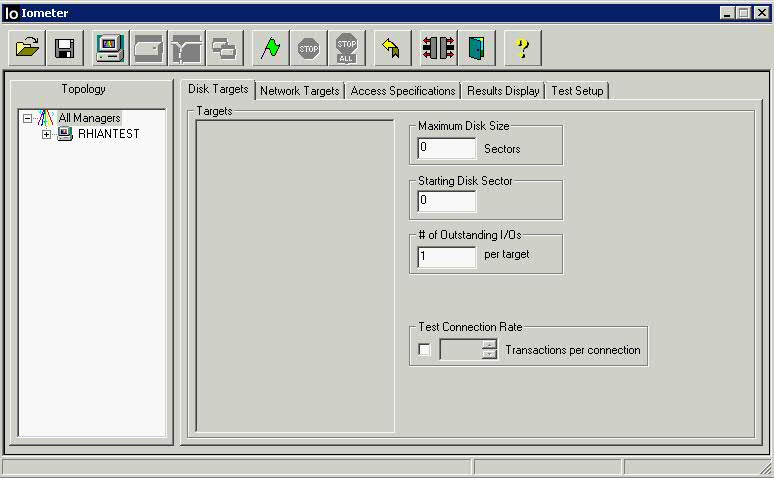 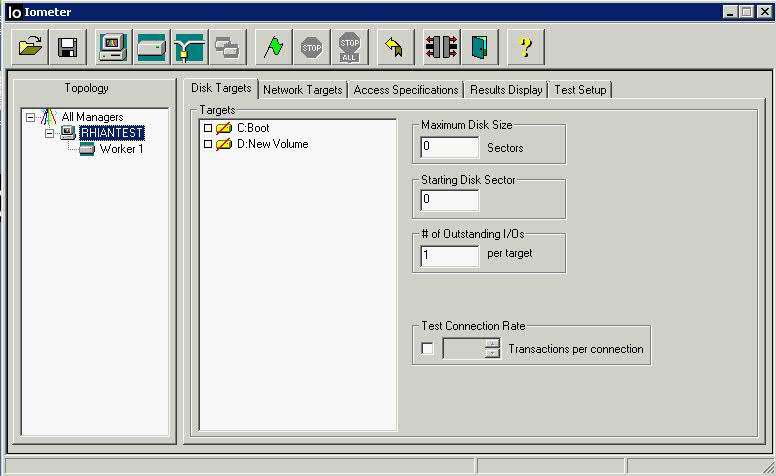 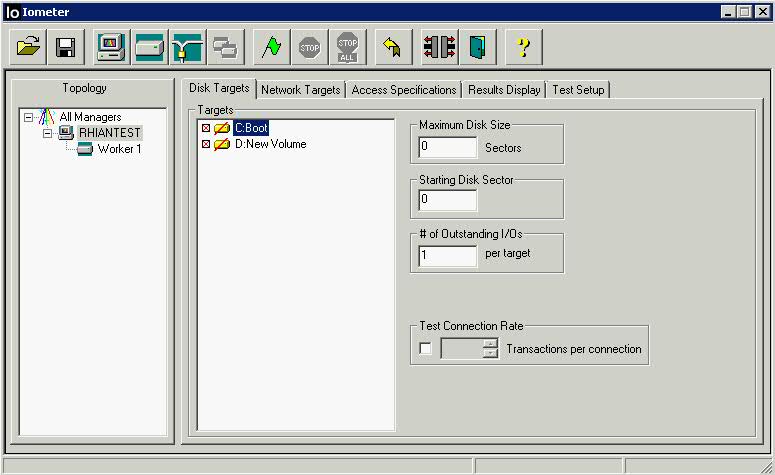 Note: If the total number of outstanding I/Os in the system is very large, Iometer or Windows may hang, thrash, or crash. The exact value of “very large” depends on the disk driver and the amount of physical memory available. This problem is due to limitations in Windows and some disk drivers, and is not a problem with the Iometer software. The problem is seen in Iometer and not in other applications because Iometer makes it easy to specify a number of outstanding I/Os that is much larger than typical applications produce. 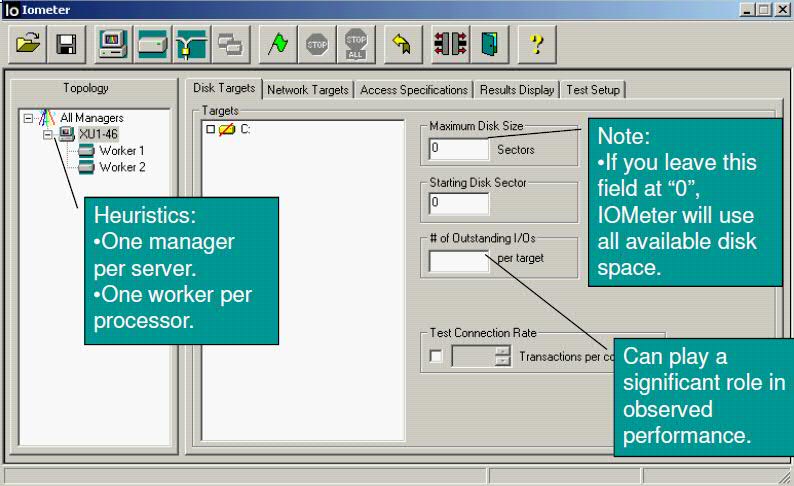 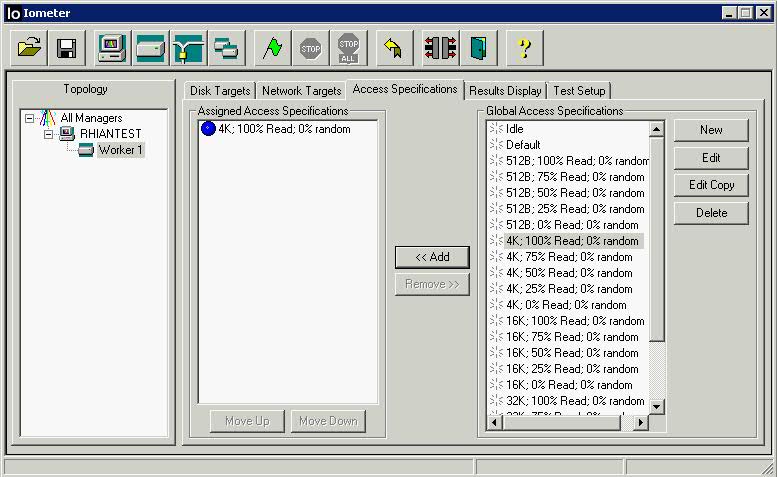 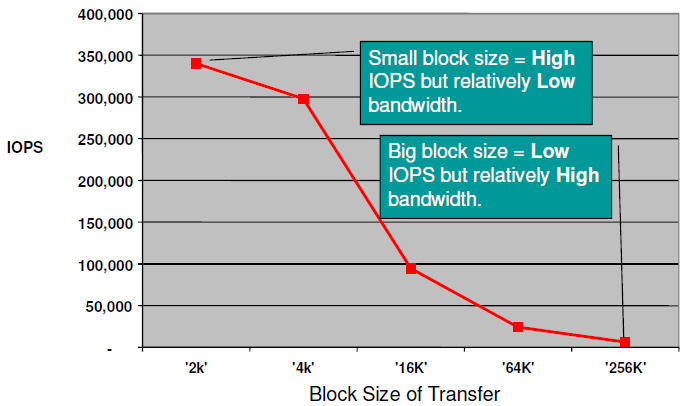 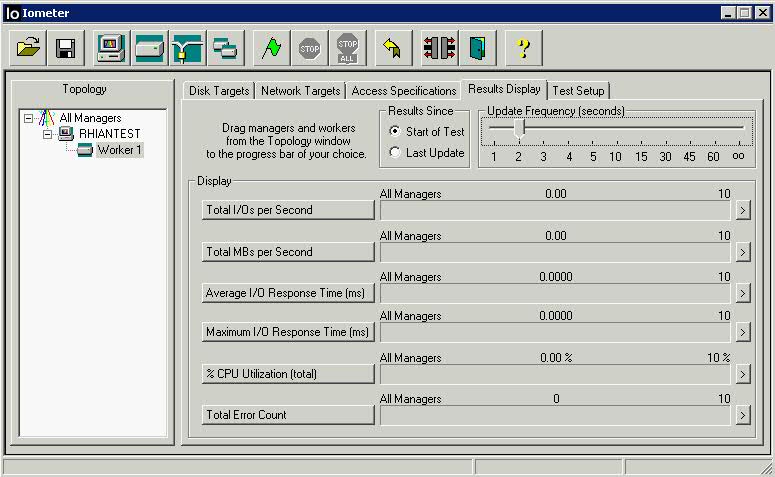 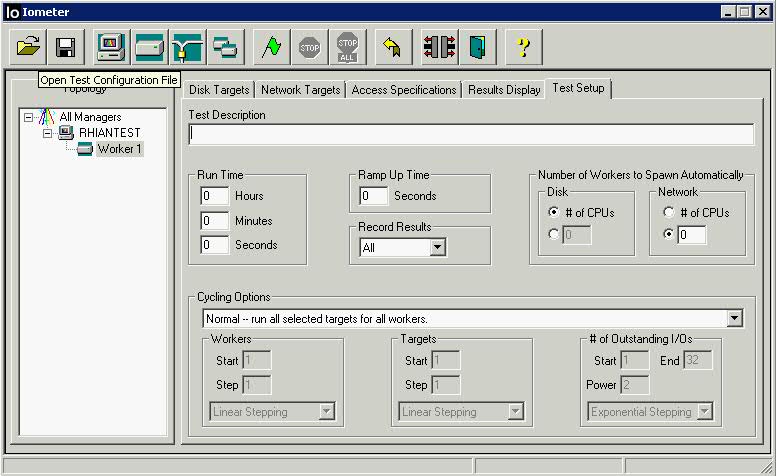 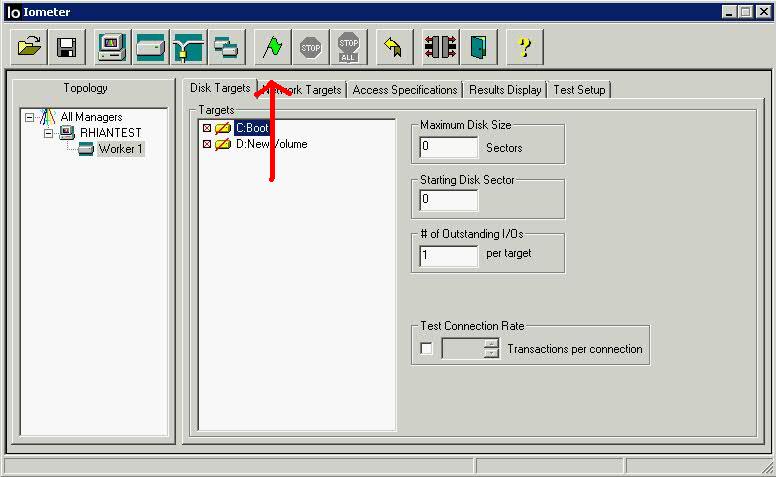 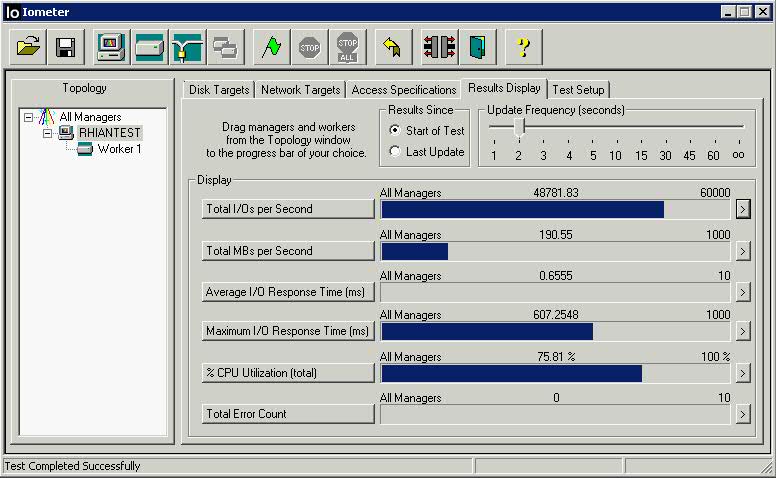 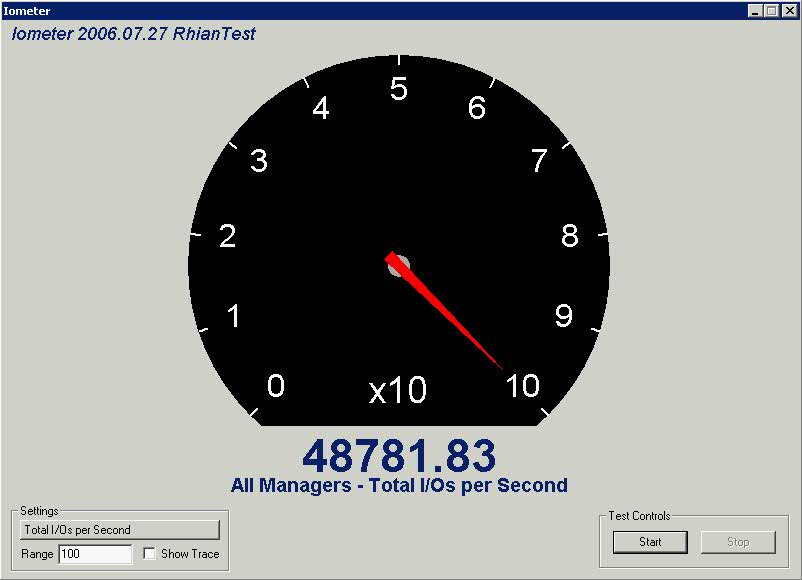 To test network performance between two computers (A and B)

Iometer is owned by Iometer (http://www.iometer.org/) and they own all related trademarks and IP rights for this software.

Iometer on cloud for AWS

• Performance of disk and network controllers.

• Bandwidth and latency capabilities of buses. 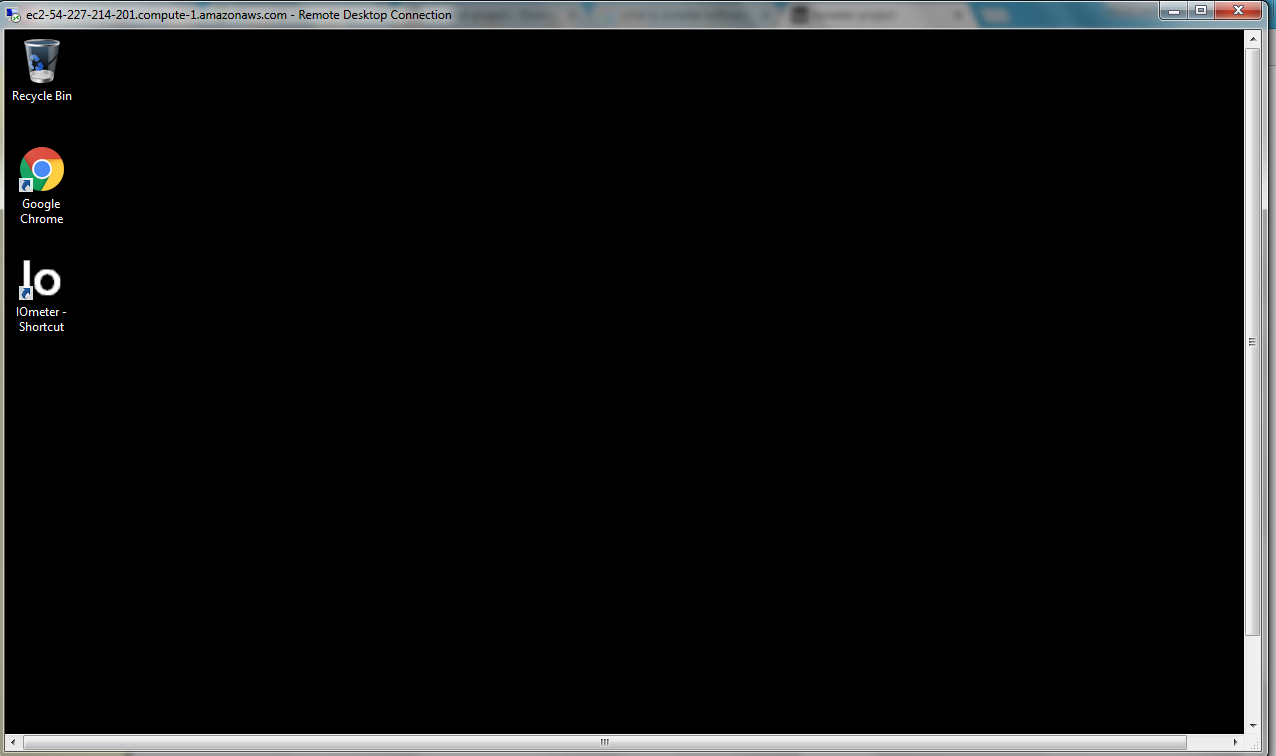 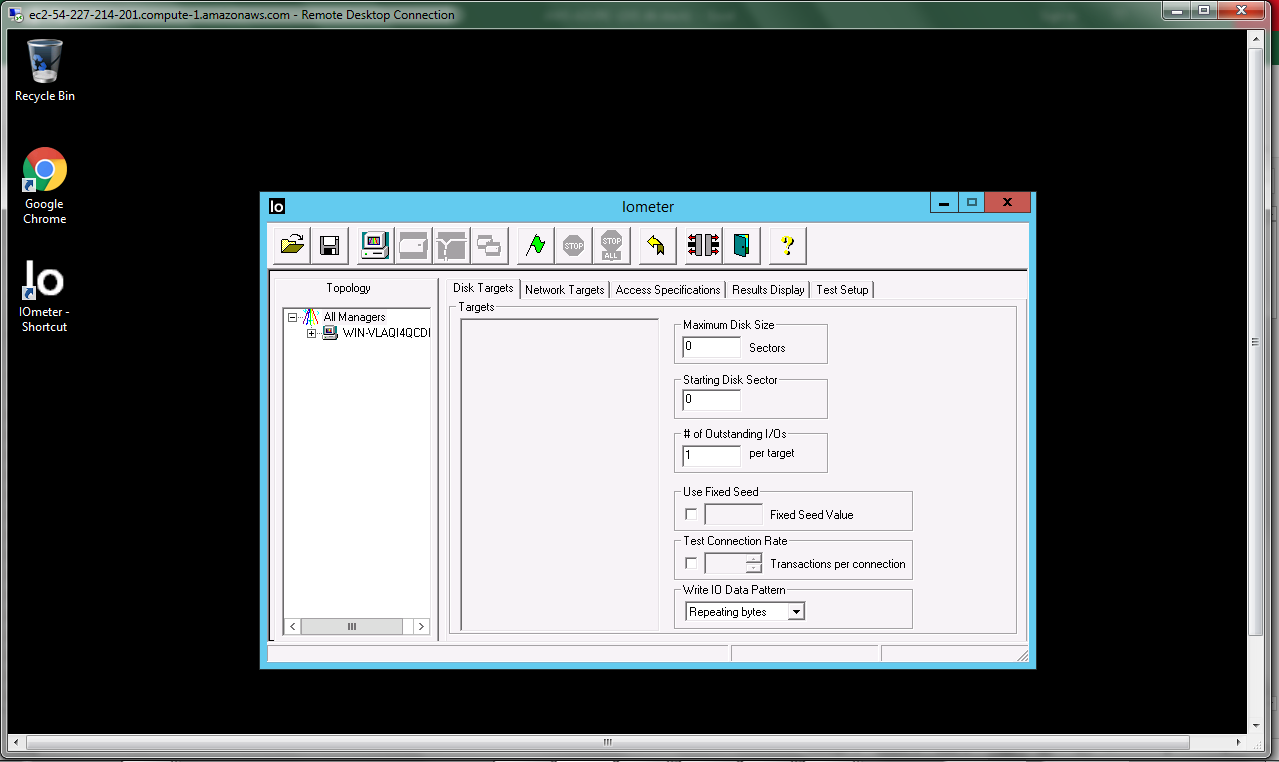 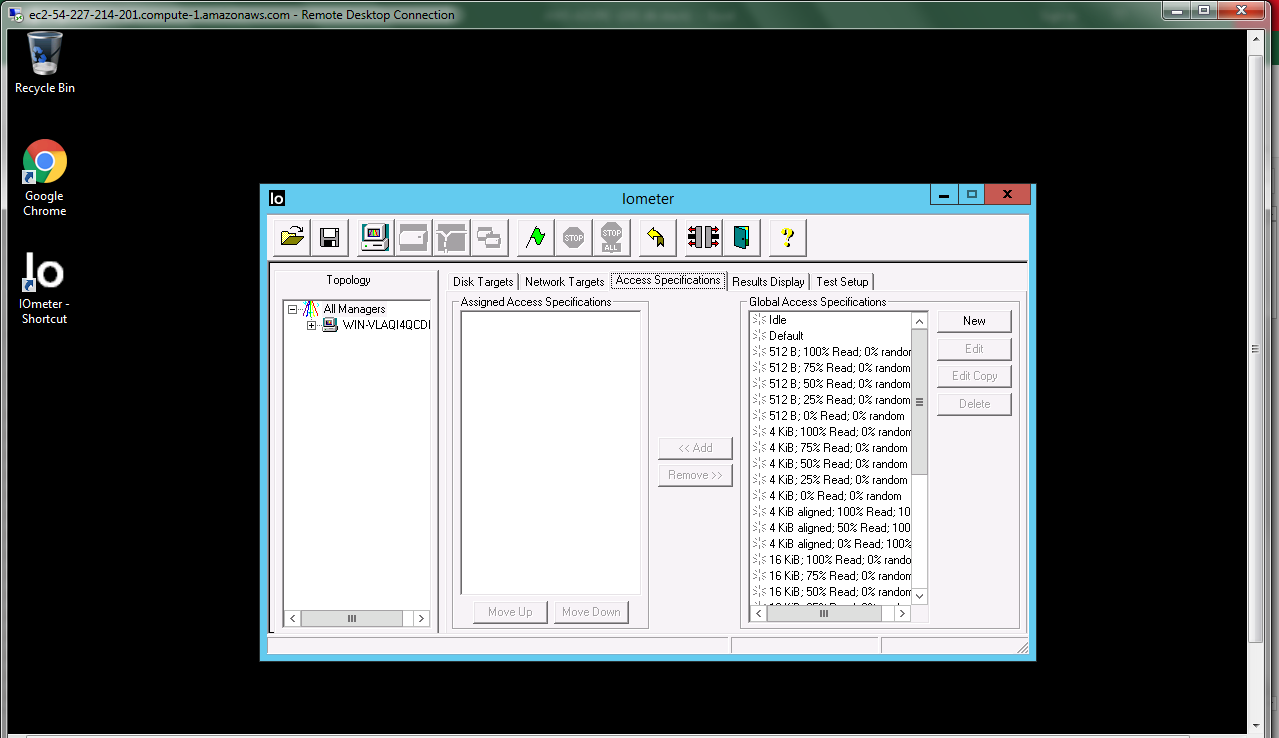 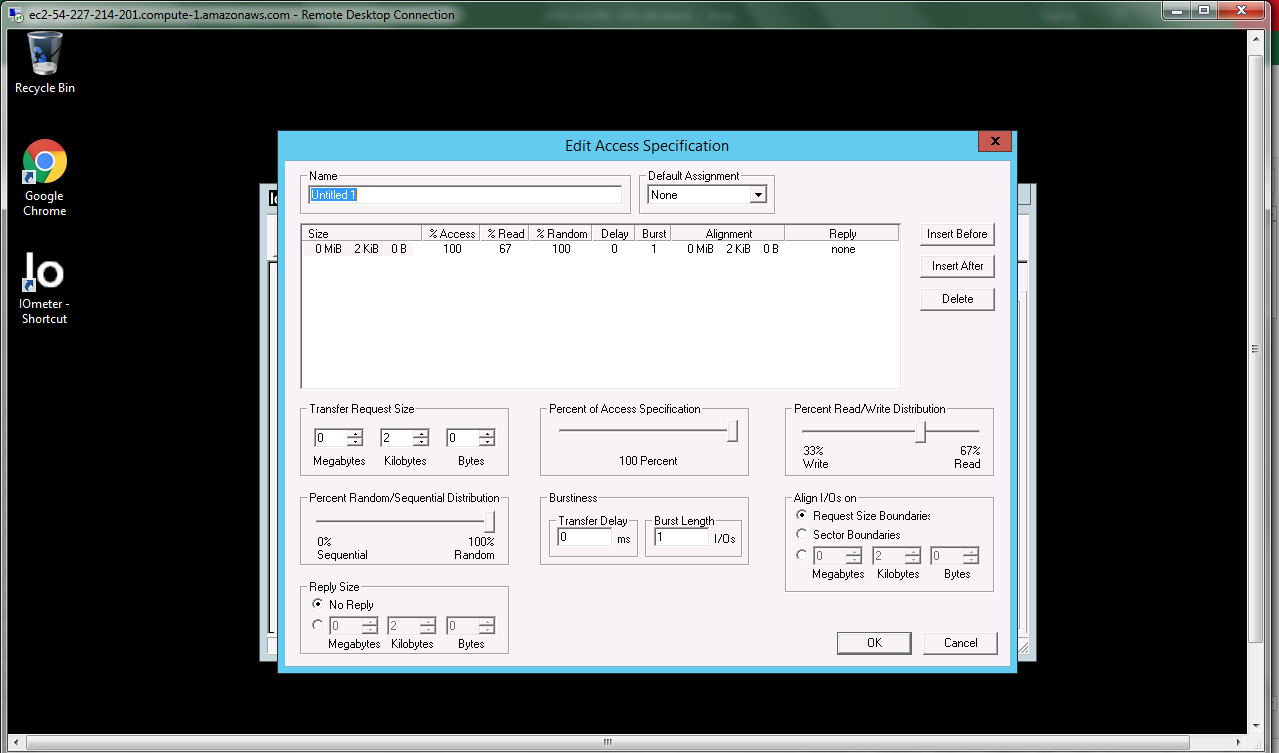 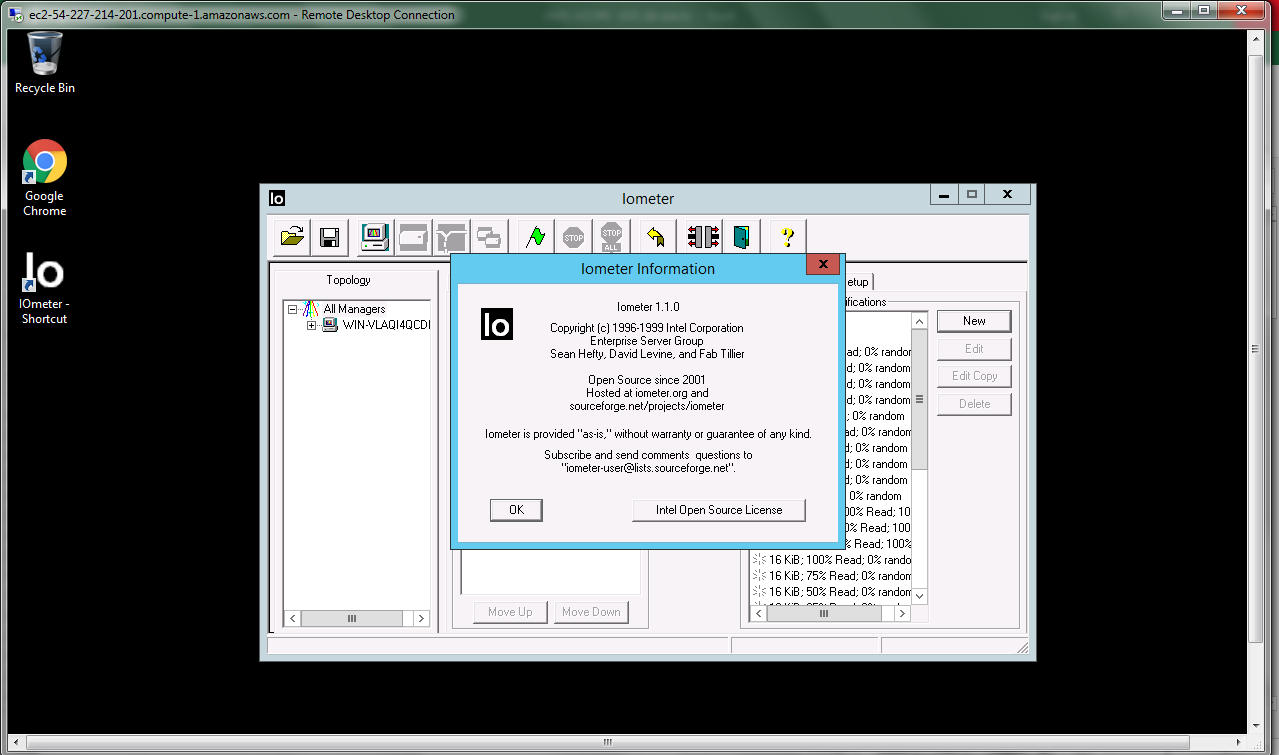