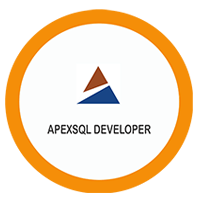 Run the toolkit from the CLI with a full, opensource library of cmdlets PowerShell. Modify and change pipelines yourself. Download and update our GitHub hostedwith changes and improvements

Add, edit or remove steps to customize CI and CD pipelines. Change the order of steps. Disable and enable steps in a pipeline without removing them. Applies to PowerShell, Web dashboard and build server Plug-ins

Consume projects to provide powerful step customization capabilities and ensure that steps run the same via the DevOps toolkit as they do when running ApexSQL tools directly. Applies to PowerShell, Web dashboard and build server Plug-ins

Configure and save data sources including databases, source control, script folders, SQL script and Nuget packages, to be consumed by various steps in your pipeline. Make a change to a data source and have it automatically utilized in all steps that use it. Browse saved data sources via the dashboard console. Applies to PowerShell, Web dashboard and build server Plug-ins

Configure email notifications for any and all events including a pipeline starting and ending as well as individual steps starting, finishing, failing and/or succeeding. Build notifications with a convenient user interface. Applies to PowerShell, Web dashboard and build server Plug-ins

View all recently run pipelines by name, last run date and status. Applies to the Web dashboard only

Set pipelines to commit on a schedule, manually or on a new commit. Applies to PowerShell, Web dashboard and build server Plug-ins

Integrate directly with Azure DevOps Server via an ApexSQL DevOps toolkit plug-in or integrate via PowerShell.

To enable the Auto-complete feature, navigate to the ApexSQL Complete menu, and click the Enable auto-complete command: 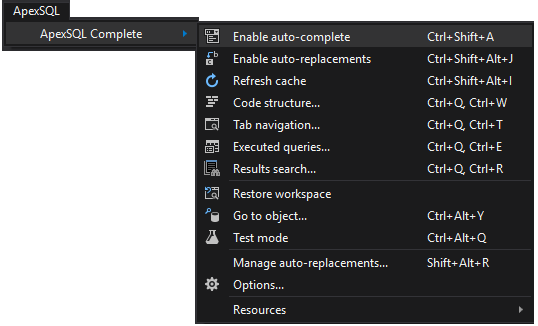 Once the feature is enabled each time the typing is started in the query window, the hint list appears, offering a hint to complete keyword, SQL fragment, or even entire SQL statement. Prior to the first appearance, the hint list loads SQL database objects based on one of the following:

Database specified in the Use Statement:

The hint list can be managed from the Options window, under the General tab, that can be initiated by going to ApexSQL menu -> ApexSQL Complete -> Options:

The hint list offers context sensitive hints, and provides possible solutions based on the content of the current query. As an example, if the Use statement is entered, the first hints in the hint list will be available databases from the server:

The hint list offers the dill down to the column level:

In case where a quick overview of current SQL code is needed, when working with large scripts, hint list can be set as transparent, so the background SQL code will be available to explore. To invoke the hint list transparency, the CTRL key needs to be pressed: 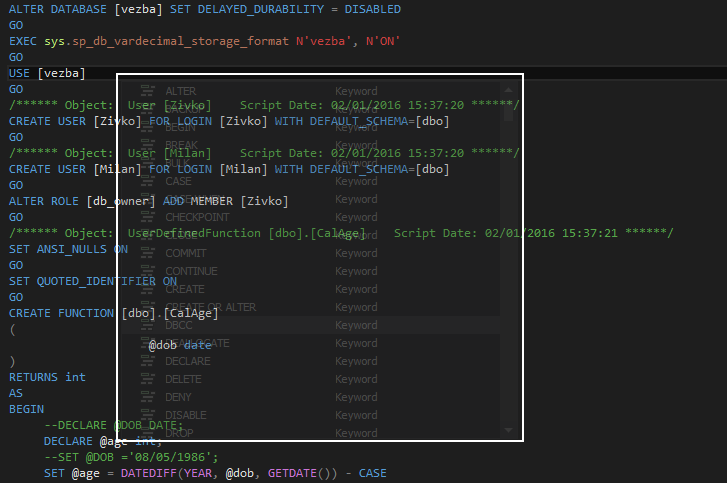 Once the feature is enabled each time the typing is started in the query window, the hint list appears, offering a hint to complete keyword, SQL fragment, or even entire SQL statement.

Capturing who saw what in SQL Server

It’s important sometimes to know and have evidence of who-saw-what on specific SQL Server instances and databases. This can be a requirement you have to provide (e.g. to comply with HIPAA regulations) and there are several ways to ensure the capture of that information

In order to capture who-saw-what in SQL Server, it is important to know what was executed on the server. Even thoughandprovide partial information, in order to get the full details on who saw what, is the perfect tool for the job.

First let’s take a look how to manually capture this information. There are several ways to do that – one is through the use of specially developed stored procedures and functions. A database can be created so that all the access is done through stored procedures (allowing EXEC statements only, while prohibiting all queries and DML operations). The stored procedure returns the results from a query while at the same time logging the access in a specialized table along with additional information of interest (e.g. time of execution) if applicable

Similarly this can be done for DML operations using stored procedures, but these are more elegantly handled via triggers, which can be automatically created by a product like ApexSQL Trigger.

Anyway, these methods are fragile as they require disciplined programming ensuring that all code execution paths are covered and more importantly, they don’t provide a solution for ad hoc queries executed by trusted parties

SQL Server itself also offers a way to collect and monitor a wide range of events via SQL Server traces. Events related to the execution of queries, changes made to permissions, failed login attempts and other similar data are among them. SQL Server Profiler is an application that monitors all such events, but this application on its own is not an out-of-the-box solution for auditing. There are complex obstacles in the way of using it in an easy manner: everything has to be done manually, figuring out and capturing events, exporting and presenting the data, etc. and it still doesn’t solve the problem of trusted parties

How we capture who-saw-what data

ApexSQL Audit was developed to automate capturing, among other things, of who-saw-what data, and make compliance with auditing regulations easy. Tool is based on leveraging the SQL Server traces, the same technology used by SQL Server Profile, but, on top of it, the fault tolerance for a wide variety of scenarios is provided, as is additional processing of captured data, parsing for referenced objects, automatic transfers and loading into centralized repository, tamper-evident data storage and so on

ApexSQL Audit captures the following operations (there are more than 230 operations recognized by our parser) divided into several categories:

The central ApexSQL Audit instance configuration dialog uses these categories to filter specific operations, and these can then be filtered even further on the object level for tables, views and other objects. Even more filtering, of course, is provided within the ApexSQL Audit’s reporting system

During the parsing process, we distinguish the difference between operations modifying or accessing objects. For example, the following statement will be captured, parsed and logged both in the DML and Query categories:The INSERT modifies Table1 while the SELECT accesses Table2. So this information is saved separately for later use in the reporting system, explicitly showing which object was modified and which one was accessed

The transfer operation is repeated in an endless loop – transfer requests are constant while packages with captured data exist on the distributed instance; otherwise, if there are no available packages, the requests are resent every 3 seconds

To avoid dependency on the security level of the connection between the central and distributed instances, we use hash checks to validate the success of the transfer. If anything goes wrong, for example during the transfer or while the data is being saved, a new request will be issued for the same remote data package. The remote package file on the distributed instance is not deleted until it is successfully transferred which the central instance has to explicitly confirm

To summarize, ApexSQL Audit relies on SQL Server traces. It configures traces based on user configuration set through GUI or uses the default configuration which is a set of common auditing requirements with optimal usage of the Central Repository Database. By default, who-saw-what queries (SELECT statements) are not captured because this category of statement is usually orders of magnitude more frequent than any other and its capturing would cause huge amounts of data being stored in the central repository database by default, whether it is needed or not. Of course, this is easily configurable through GUI

We are excited to announce the release of another new SQL Server developer tool called This is a tool that can import and export data from the database in various file formats.

ApexSQL Pump is a standalone application with the possibility of running it via CLI. The application itself is very easy to use with the help of a wizard to guide the user through the process.

It can import data from 16 and export to 19 different data sources with the possibility to export table structure. All SQL data types are supported and the user can preview data. ApexSQL Pump can also import and export options template and can import multiple files into multiple tables on different servers.

The user can either create a new project or open a previously saved project. When creating a new project, a New project dialog will appear for selecting SQL Server, Authentication and Database under the Data source tab: 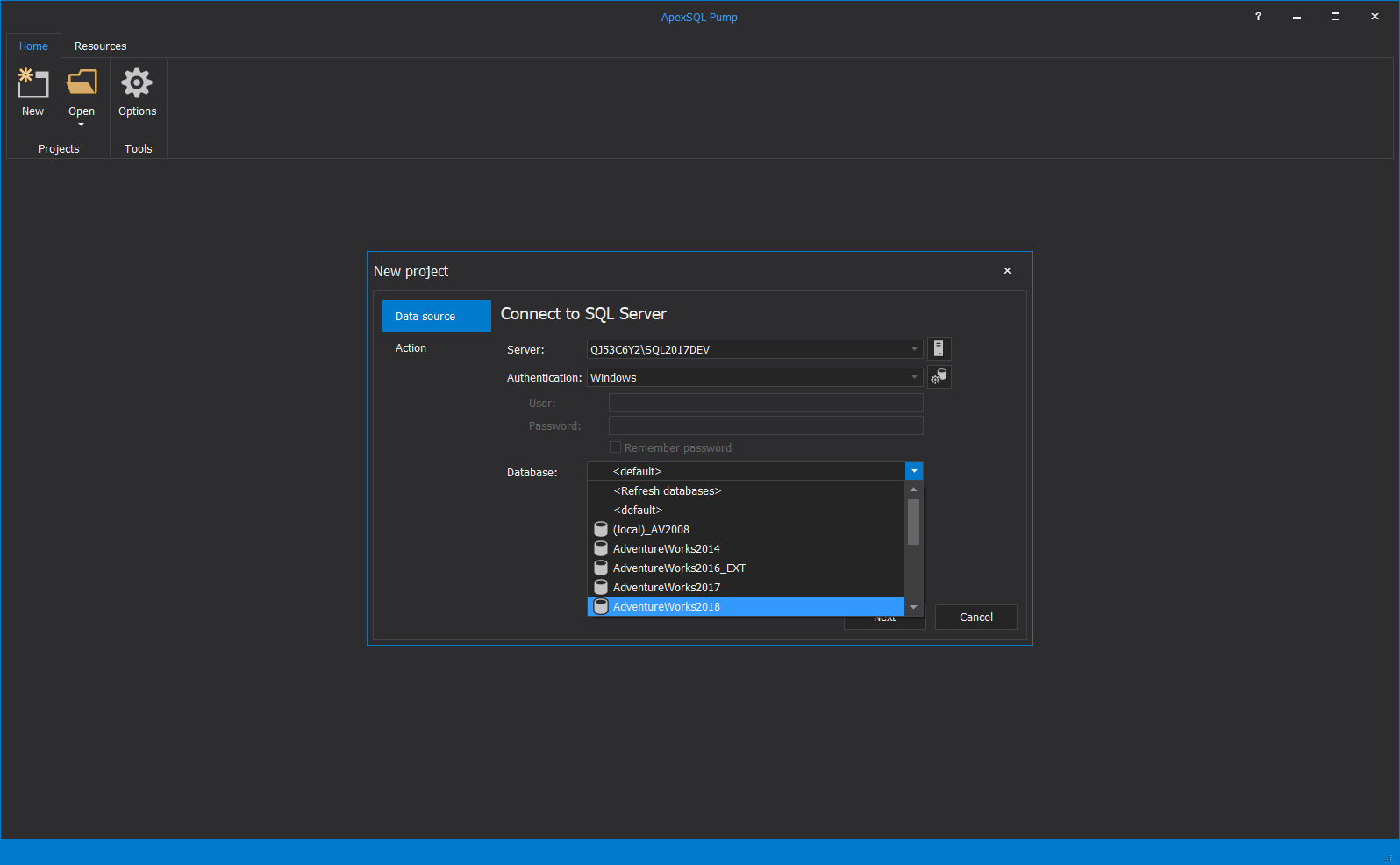 To proceed further, select the Action tab where either Export or Import option can be chosen: 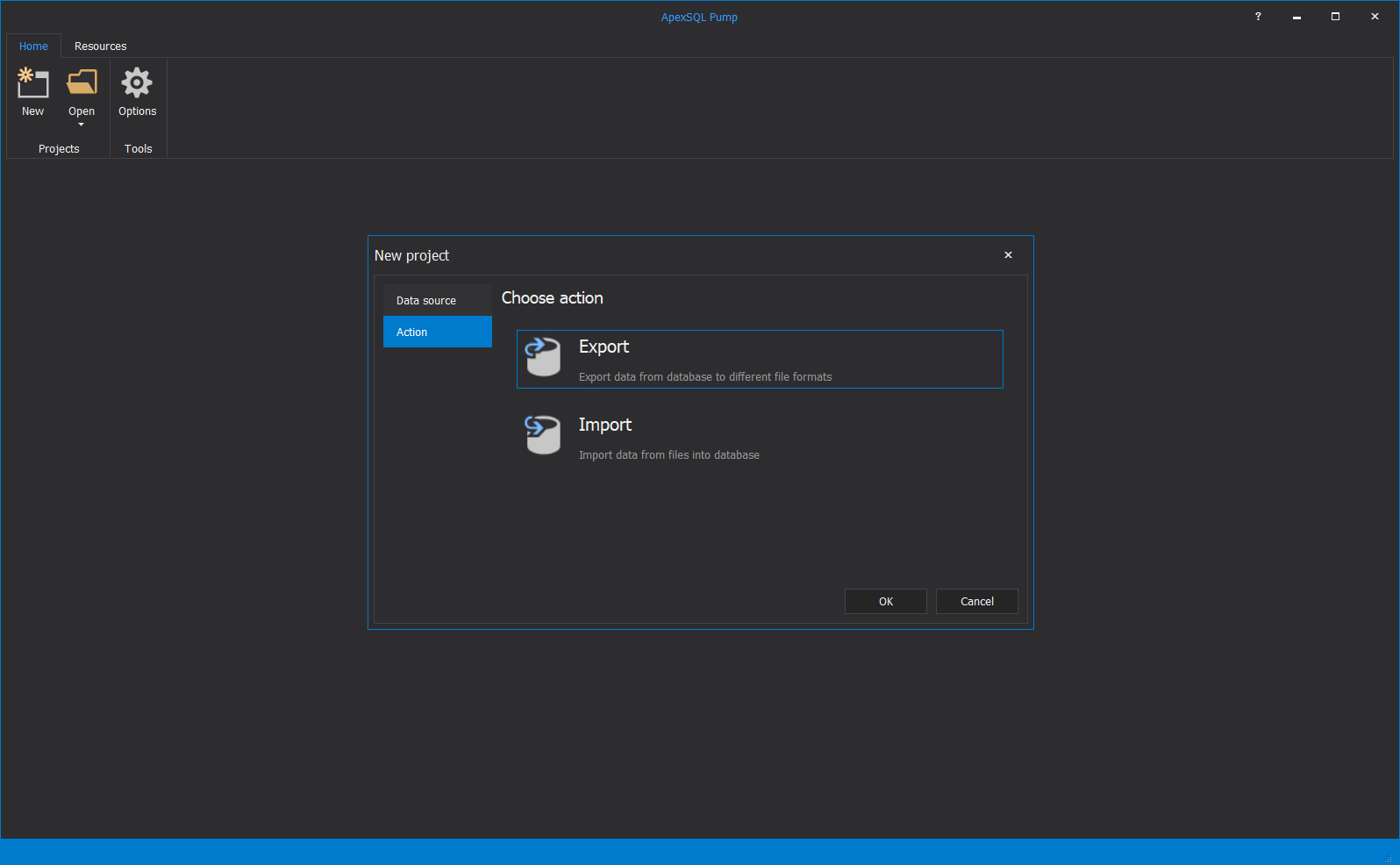 This is the main grid where the loaded SQL database is shown. By default, all the tables and views are checked and on the right side is the Preview panel which allows user to preview the data before the process is started: 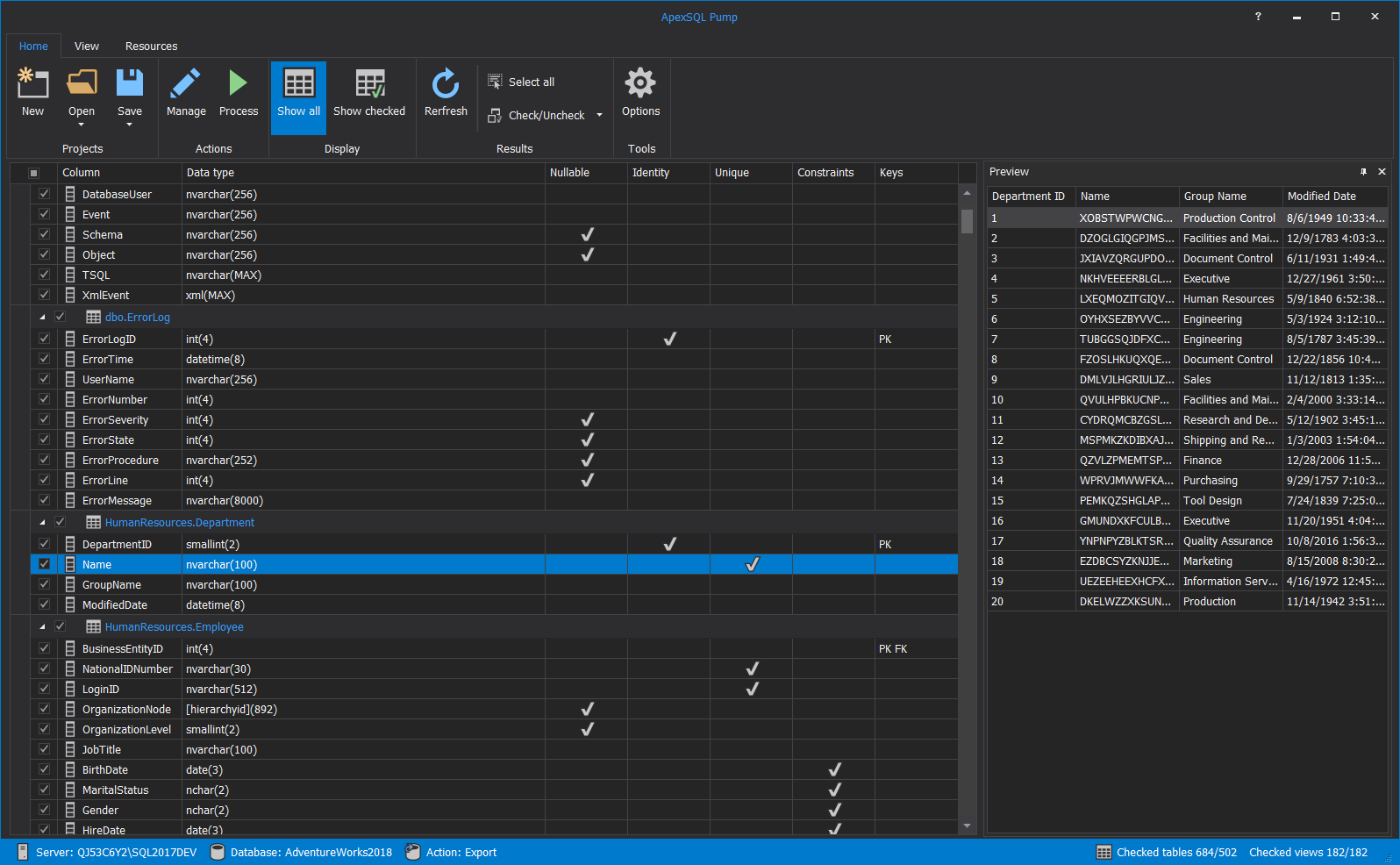 All the previously loaded tables can be seen here. In the Preview panel, the data that already exists in the selected table, from the table they selected on the left, can be seen. When another table is selected, the grid on the right will automatically change. In this step, certain tables can be unchecked in case they are not needed after seeing the table preview.

When the Manage button for the export action is clicked, the next step is to select the file format. The window with all 16 available exporting formats can be seen, and one of them can be selected: 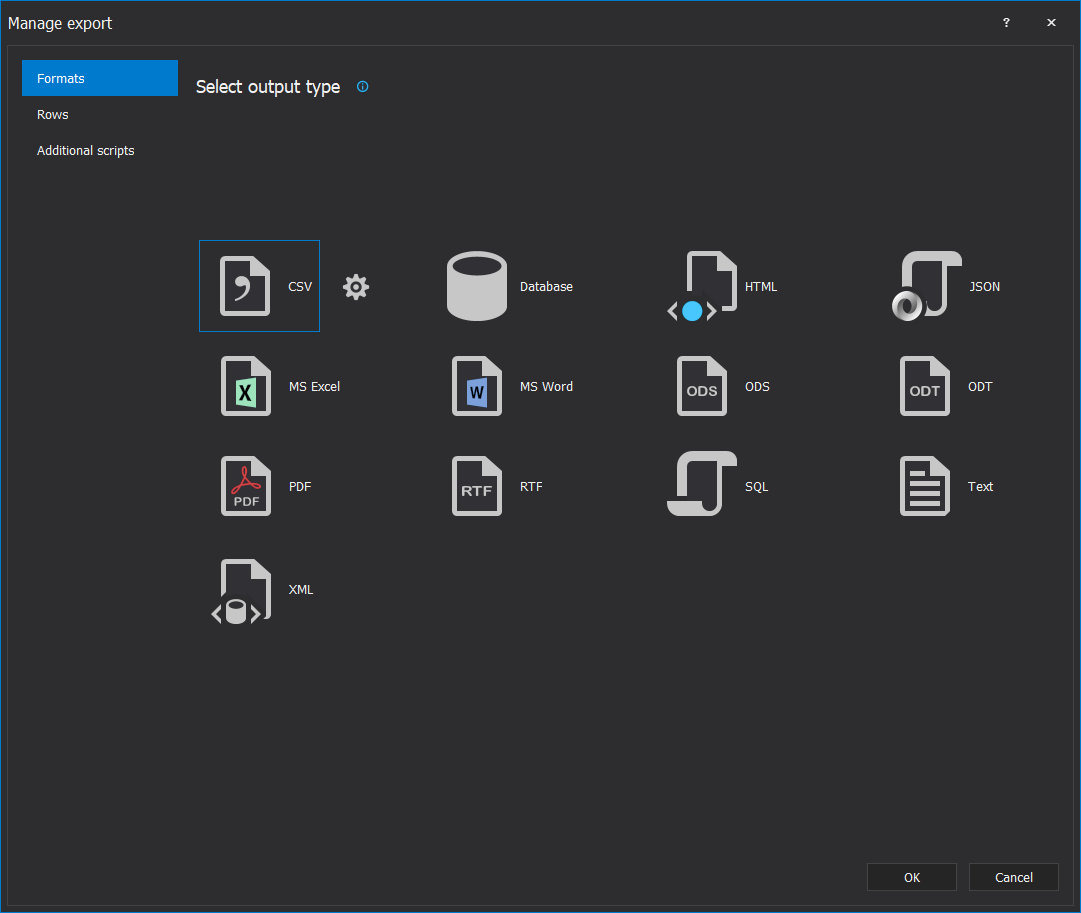 Note: Export to both Excel 1997-2003 and 2007 file formats are supported. Here, only one MS Excel item is shown, but in the next step, the format can be chosen. The same goes for MS Word and MS Access.

After this, the next steps are all options for the selected file format.

The rows selection is the next step in the Manage export window where All rows or a certain Range of rows can be selected: 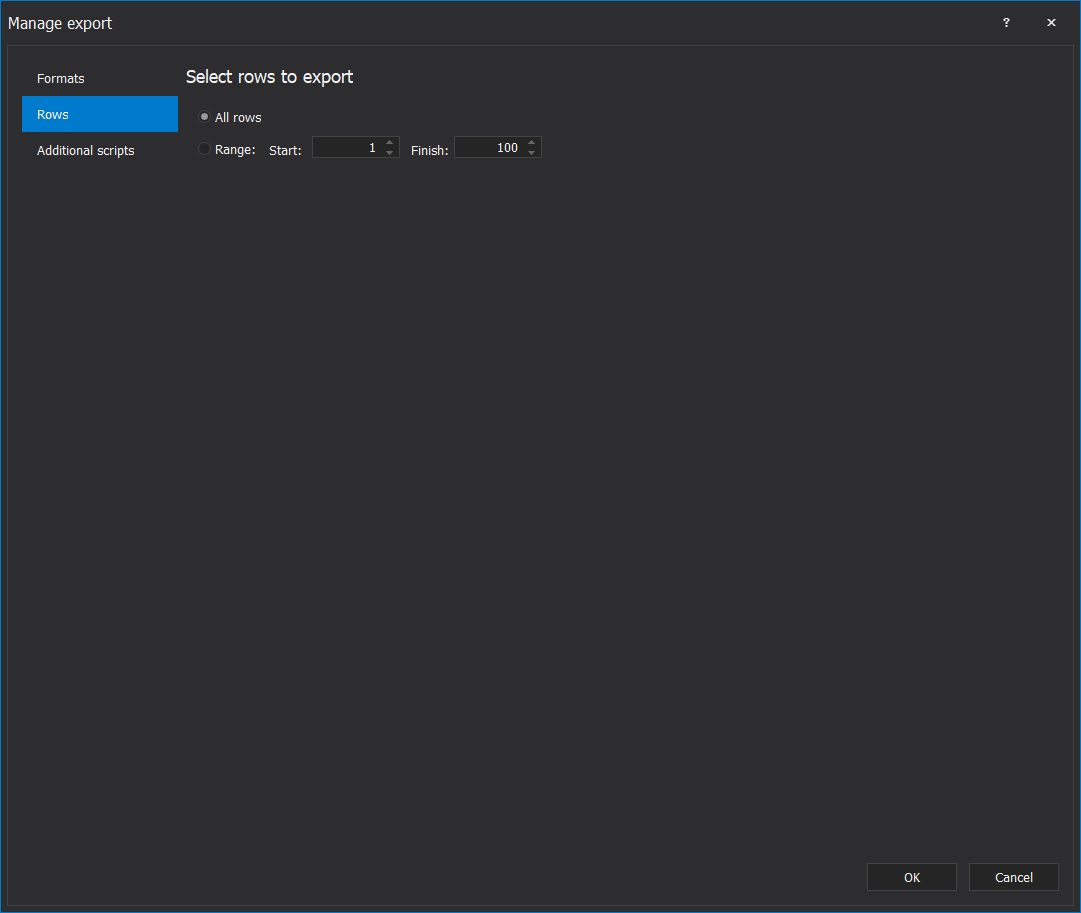 It is possible to add the pre and post-deployment scripts under the Additional scripts tab that will be executed after the export is finished: 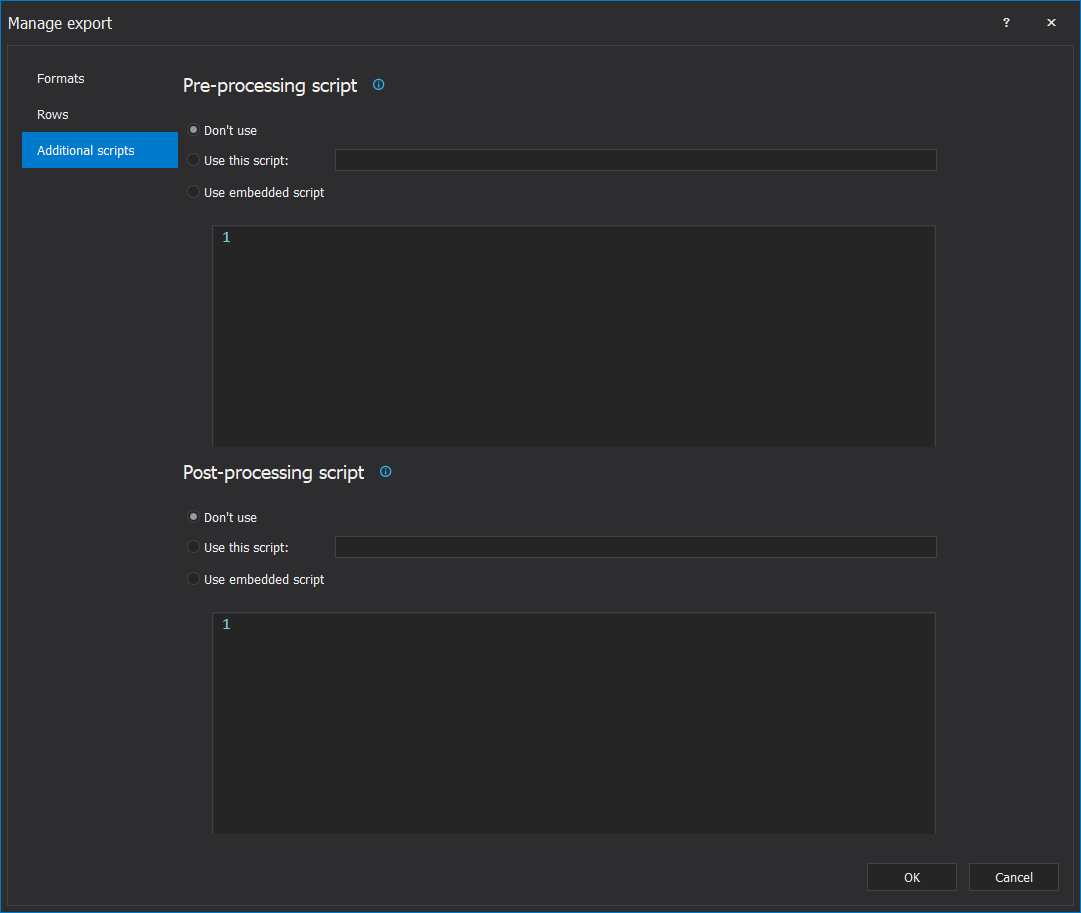 This step is optional, a script can be added if there is a need for that, but it can be skipped.

The last step is to click the Process button from the Home tab where the Export process will start and Job summary will be shown: 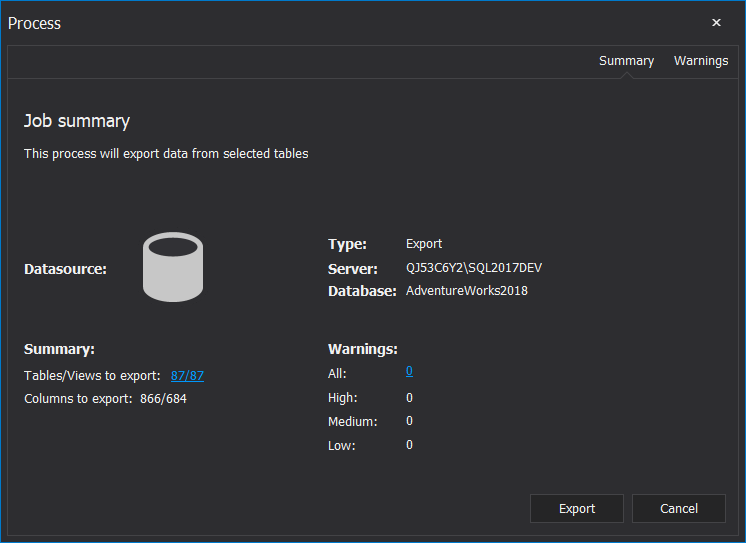 ApexSQL Pump supports 13 different data sources for the import; one of them can be selected for the one task: 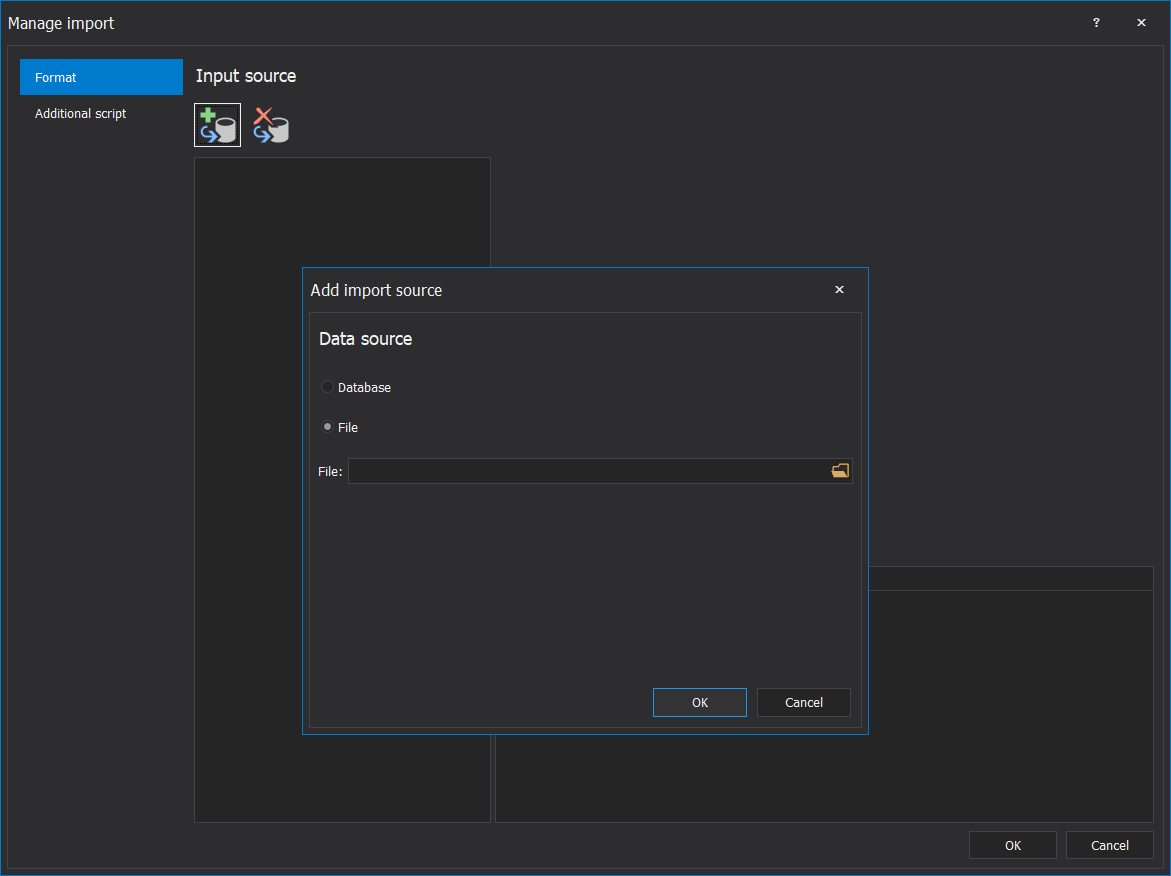 The next steps are options based on the input type. After options are set for the selected file format, the user needs to map all desired tables with data from a chosen file: 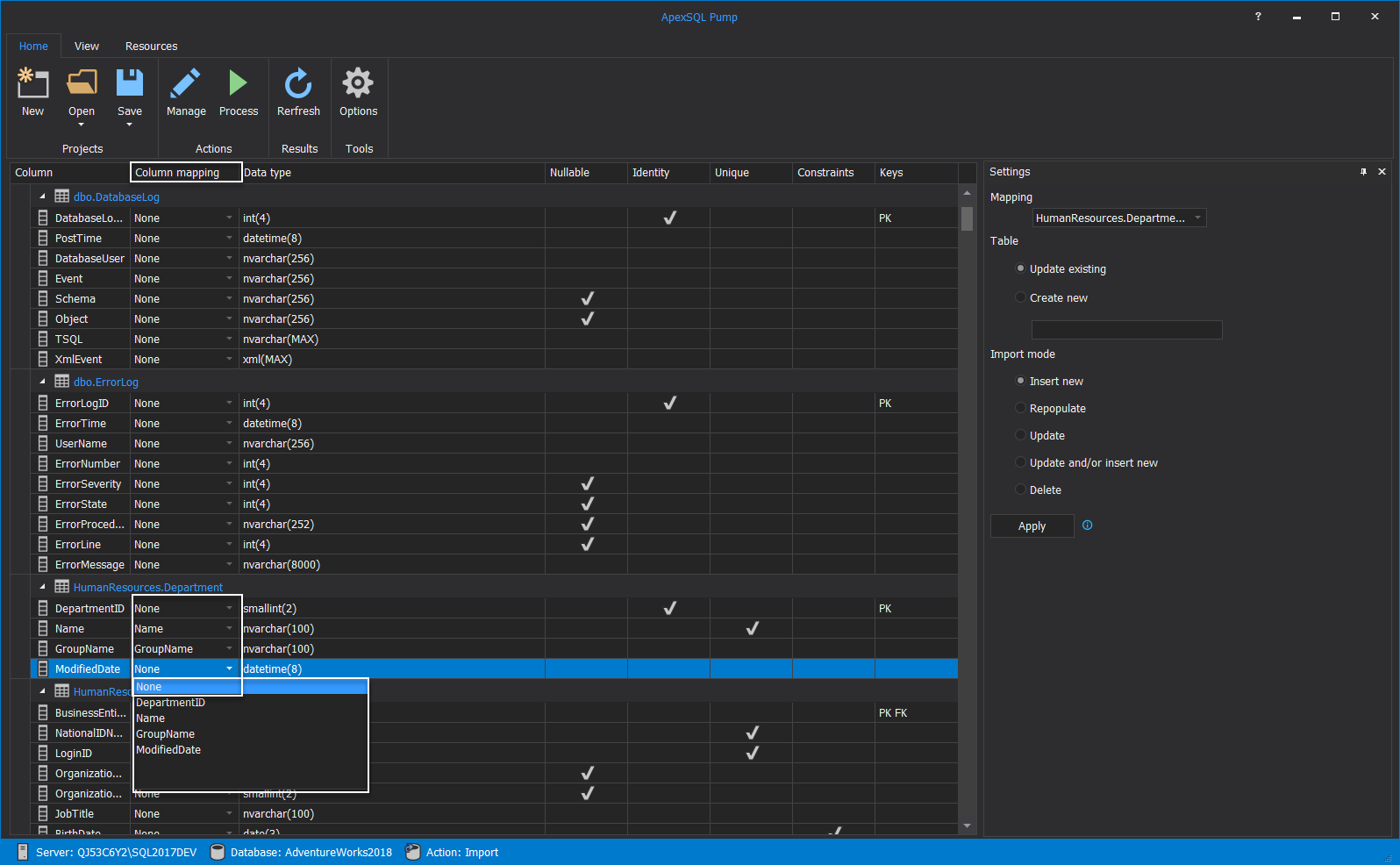 When the user maps all columns from all tables, in the last step there is a possibility to add pre and/or post-execution script: 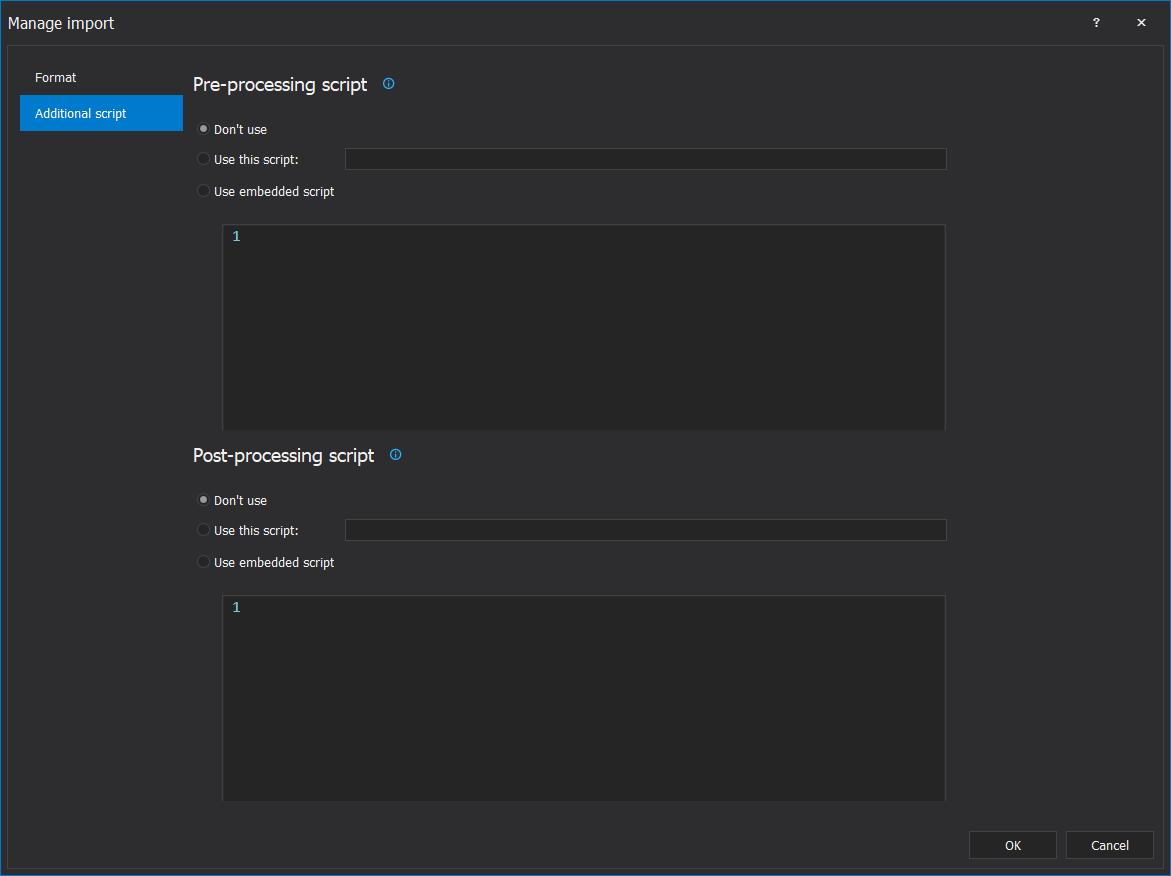 As it was in the last step for the export, here can be selected either to execute the task or to create the script to execute it later: 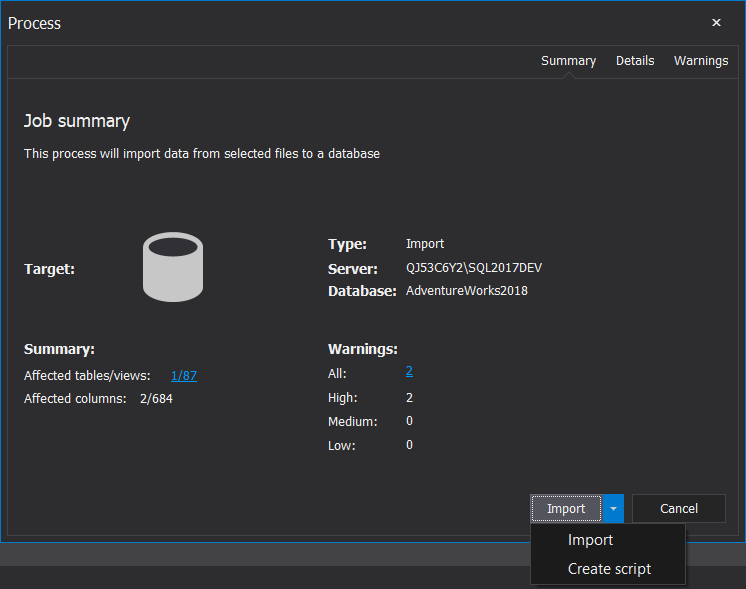 ApexSQL Developer on cloud for AWS

Include static data in builds

Document and report on changes

Work with all popular SC systems

Note:  How to find PublicDNS in AWS

1.Default installation path: will be in your root folder “C:\Program Files\ApexSQL ”
2.Default ports: 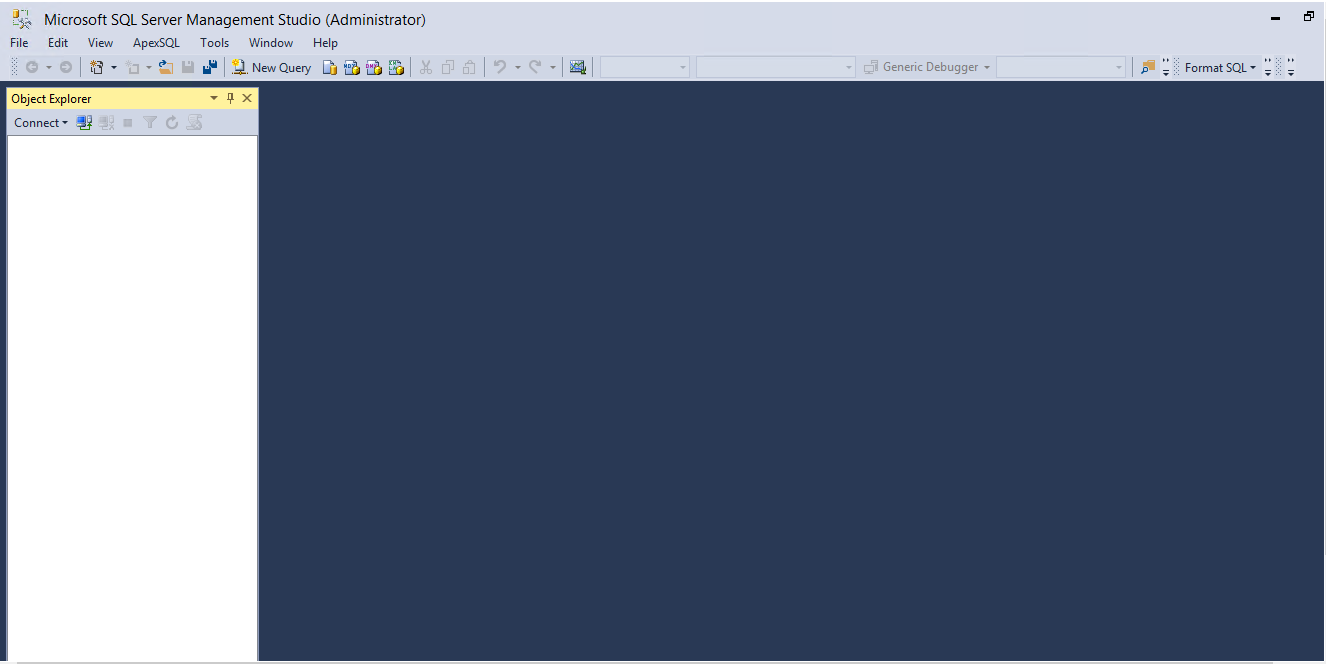